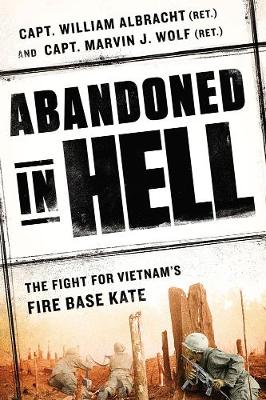 The Fight for Vietam's Fire Base Kate

In October 1969, William Albracht, the youngest Green Beret captain in Vietnam, took command of a remote hilltop outpost called Firebase Kate held by only twenty-seven American soldiers and 156 Montagnard militiamen. He found their defenses woefully unprepared. At dawn the next morning, three North Vietnamese Army regiments-some six thousand men-crossed the Cambodian border and attacked.
Outnumbered three dozen to one, Albracht's men held off repeated ground assaults by Communist forces through fierce hand-to-hand fighting, air support, and a dangerously close B-52 strike. For days, the NVA blanketed Kate in a rain of rockets, mortars, artillery, and machine-gun and small-arms fire, blocking efforts to resupply, reinforce, or evacuate the outpost. Albracht continually exposed himself to enemy fire to direct air strikes, to guide resupply helicopters, to distribute ammunition and water to his men, to retrieve the dead, and to rescue the wounded, often shielding men with his own body. Wounded by rocket shrapnel, he refused medical attention or evacuation. Exhausted from days without sleep, he continued to rally his men to beat off each new enemy attack.

After five days, Kate's defenders were out of ammo and water. Aerial resupply attempts would have been suicidal, and reinforcements were denied by military commanders who had written off Kate. Refusing to die in place or to allow his men to surrender, Albracht led his troops, including many wounded, off the hill and on a daring night march through enemy lines, a feat never duplicated during the Vietnam War.

Abandoned in Hellis an astonishing memoir of leadership, sacrifice, and brutal violence, a riveting journey into Vietnam's heart of darkness, and a compelling reminder of the transformational power of individual heroism. Not sinceLone SurvivorandWe Were Soldiers Once . . . and Younghas there been such a gripping and authentic account of battlefield courage.
Praise for Abandoned in Hell
'Surrounded, vastly outnumbered, pounded day and night by incoming fire, and all but abandoned, tiny Firebase Kate should have fallen within twenty-four hours. That it did not is a testament to Captain Albracht and the fighting tenacity of those around him. This is an exceptional account, told in much detail.' Major John L. Plaster, US Army Special Forces (Ret.) and author of Sog and Secret Commandos
'Marvin Wolf and William Albracht have produced in Abandoned in Hell a riveting, dead-true account in the tradition of Black Hawk Down and We Were Soldiers Once...and Young - that is, an in-detail narrative of events that could be studied by historian or by cadets in academies of war, but that also reads like a breathless, hair-raising novel.' Steven Pressfield, National Bestselling Author of The Lion's Gate
'Albracht's gallantry defending Kate and his actions in the days that followed reached mythical proportions. A true story told as only a combat veteran can tell it, Abandoned in Hell is essential reading about the brave men who lived and died fighting an unpopular war.' David Hume Kennerly, Winner of the 1972 Pulitzer Prize for Feature Photography
'Wolf and Albracht have interwoven the history, the tumult of battle, and the spectrum of personalities that turn up on a forlorn red dirt hill on the Cambodian border in the crunch year of 1968....It's a story that grabs you by the throat and won't let go.' Tim Page, Photojournalist and Author of Another Vietnam
'This gripping, gritty, and cinematic blow-by-blow account of outnumbered Americans locked in a desperate battle with the North Vietnamese Army is destined to become a classic of its genre. If you read only one book about Vietnam this year, this must be the one.' Major General Paul Vallely, US Army (Ret.), Two-Tour Vietnam Veteran, Fox News Senior Military Analyst, and Author of Endgame- The Blueprint for Victory in the War on Terror
'This extraordinary narrative about leadership, loyalty, and trust grabbed me from page one. It should be required reading for anyone who wants to know what really happened in Vietnam.' Rocky Bleier, Decorated Vietnam Veteran and Four-Time Super Bowl Champion
Includes Photos

Other Editions - Abandoned In Hell by William Albracht » Have you read this book? We'd like to know what you think about it - write a review about Abandoned In Hell book by William Albracht and you'll earn 50c in Boomerang Bucks loyalty dollars (you must be a Boomerang Books Account Holder - it's free to sign up and there are great benefits!)

William Albracht is a highly decorated Vietnam veteran and retired Secret Service agent whose twenty-five-year White House career included the protection details of four American presidents and numerous foreign dignitaries. Upon retirement, Albracht managed executive security operations at the Ford Motor Company before returning to his hometown to open a security consulting business. Marvin J. Wolf is a decorated Vietnam veteran and the author or coauthor of many nonfiction books, including Where White Men Fear to Tread and Buddha's Child.

A Preview for this title is currently not available.
More Books By William Albracht
View All