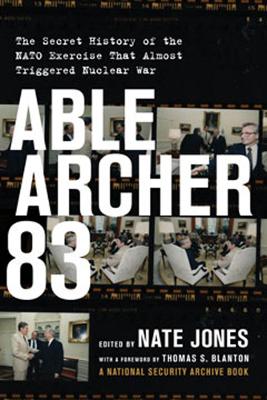 In November 1983, Soviet nuclear forces went on high alert. After months nervously watching increasingly assertive NATO military posturing, Soviet intelligence agencies in Western Europe received flash telegrams reporting alarming activity on U.S. bases. In response, the Soviets began planning for a countdown to a nuclear first strike by NATO on Eastern Europe. And then Able Archer 83, a vast NATO war game exercise that modeled a Soviet attack on NATO allies, ended.
What the West didn't know at the time was that the Soviets thought Operation Able Archer 83 was real and were actively preparing for a surprise missile attack from NATO. This close scrape with Armageddon was largely unknown until last October when the U.S. government released a ninety-four-page presidential analysis of Able Archer that the National Security Archive had spent over a decade trying to declassify. Able Archer 83 is based upon more than a thousand pages of declassified documents that archive staffer Nate Jones has pried loose from several U.S. government agencies and British archives, as well as from formerly classified Soviet Politburo and KGB files, vividly recreating the atmosphere that nearly unleashed nuclear war.

» Have you read this book? We'd like to know what you think about it - write a review about Able Archer 83 book by Nate Jones and you'll earn 50c in Boomerang Bucks loyalty dollars (you must be a Boomerang Books Account Holder - it's free to sign up and there are great benefits!)

A Preview for this title is currently not available.
More Books By Nate Jones
View All