Abrogation in the Qur'an and Islamic Law

Description - Abrogation in the Qur'an and Islamic Law by Louay Fatoohi

This book examines in detail the concept of "abrogation" in the Qur'an, which has played a major role in the development of Islamic law and has implications for understanding the history and integrity of the Qur'anic text. The term has gained popularity in recent years, as Muslim groups and individuals claim that many passages about tolerance in the Qur'an have been abrogated by others that call on Muslims to fight their enemies. Author Louay Fatoohi argues that this could not have been derived from the Qur'an, and that its implications contradict Qur'anic principles. He also reveals conceptual flaws in the principle of abrogation as well as serious problems with the way it was applied by different scholars.

Abrogation in the Qur'an and Islamic Law traces the development of the concept from its most basic form to the complex and multi-faceted doctrine it has become. The book shows what specific problems the three modes of abrogation were introduced to solve, and how this concept has shaped Islamic law. The book also critiques the role of abrogation in rationalizing the view that not all of the Qur'anic revelation has survived in the "mushaf", or the written record of the Qur'an. This role makes understanding abrogation an essential prerequisite for studying the history of the Qur'anic text. 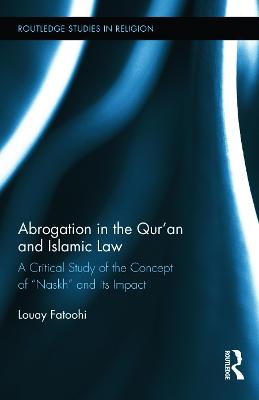 » Have you read this book? We'd like to know what you think about it - write a review about Abrogation in the Qur'an and Islamic Law book by Louay Fatoohi and you'll earn 50c in Boomerang Bucks loyalty dollars (you must be a Boomerang Books Account Holder - it's free to sign up and there are great benefits!)

Louay Fatoohi is the Operations Director at Packt Publishing. His research interests are in Qur'anic studies, including comparisons between the Qur'an's account of history with Biblical narratives, other Jewish and Christian writings, and historical sources. He is the author of The Mystery of the Historical Jesus (2007) and Prophet Joseph in the Qur'an, the Bible, and History (2007).

A Preview for this title is currently not available.
More Books By Louay Fatoohi
View All