Absent Without Leave follows three wide-eyed young Australian men from their enlistment at the Sydney Showground in 1940 to the war in the Middle East and jungle warfare in the Asia-Pacific. Private Stanley Livingston and his two best mates, Roy Lonsdale and Gordon Oxman, would be brothers-in-law as well as brothers in arms by the end of the war, as Stanley would marry Roy's sister Evelyn, while Gordon would marry Lilly Livingston, Stanley's younger sister.

In this case the term absent without leave has no negative connotation. Between their Middle East and Pacific campaigns Privates Livingston and Oxman, and many of their fellow soldiers, abandoned their units to be with their loved ones. These men were not running from battle or responsibility, but to the service of their families who desperately needed them.

This is also an account of the civilian men and women back home, and of Stanley's future wife, Evelyn. Evelyn's war is a story in itself, by day riveting bombers at Kingsford Smith Airport, by night enjoying the spoils of war courtesy of the ever-present and exotic American servicemen.

Absent Without Leave gives a deeply human face to the circumstances of war. Like many veterans, Stanley Livingston spoke little about the war, and this book is an attempt by his son to discover the man he had never really known. The result is an extraordinary story about an ordinary man: illuminating, deeply moving and told with no shortage of humour. Absent Without Leave unearths a part of Australian history that has largely been forgotten, because no-one ever really talked about it. Until now.

» Have you read this book? We'd like to know what you think about it - write a review about Absent Without Leave book by Paul Livingstone and you'll earn 50c in Boomerang Bucks loyalty dollars (you must be a Boomerang Books Account Holder - it's free to sign up and there are great benefits!)

Paul is the author of five books, nine radio plays and was a co-writer on the animated feature film, Happy Feet Two. He has received four AWGIE awards for television comedy writing (2009-2012). In 2001 Neil Armfield directed Paul's first stage play Emma's Nose for Belvoir Street Theatre. Paul has appeared in a dozen feature films and numerous theatre productions. His comic alter ego Flacco (1986-present) has toured extensively in Australia and internationally, and his television credits include: The Big Gig, Daas Kapital, Good News Week and The Sideshow. Flacco was a regular on the Triple J Breakfast program from 1994 to 1997. Paul was the joint winner of the 1996 Sidney Myer Performing Arts Award for outstanding achievement in the performing arts in Australia. Paul's non-fiction biography of his father's wartime experiences, Absent Without Leave, is due for release in late 2013.

A Preview for this title is currently not available.
More Books By Paul Livingstone
View All 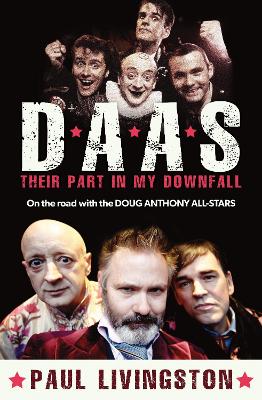