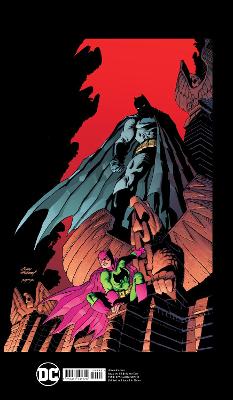 In 1986, Frank Miller introduced his iconic take on Batman and changed the face of comics forever. Now, three decades after BATMAN- THE DARK KNIGHT RETURNS, Miller himself has returned with a third chapter to his groundbreaking saga.

It's been three years since the Batman defeated Lex Luthor and saved the world from tyranny. Three years since anyone has seen Gotham City's guardian alive. Wonder Woman, Queen of the Amazons...Hal Jordan, the Green Lantern...Superman, the Man of Steel...all of the Dark Knight's allies have retreated from the front lines of the war against injustice.

But now a new war is beginning. An army of unimaginable power led by Superman's own daughter is preparing to claim Earth as their new world.

The only force that can stop this master race--Batman--is dead.

Collecting the full nine-issue miniseries and its mini-comic tie-in issues, this gorgous book is packed with extra materials never before published all together in an oversized Absolute format!

» Have you read this book? We'd like to know what you think about it - write a review about Absolute Batman: The Dark Knight: The Master Race book by Frank Miller and you'll earn 50c in Boomerang Bucks loyalty dollars (you must be a Boomerang Books Account Holder - it's free to sign up and there are great benefits!)


A Preview for this title is currently not available.
More Books By Frank Miller
View All