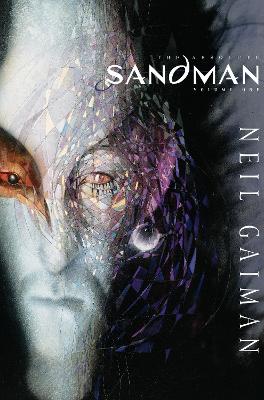 Written by Neil Gaiman Art by Sam Kieth, Mike Dringenberg, Malcolm Jones III, Chris Bachalo, Michael Zulli, Steve Parkhouse, Kelley Jones, Charles Vess and Colleen Doran Cover by Dave McKean THE SANDMAN, written by New York Times best-selling author Neil Gaiman, was the most acclaimed comic book title of the 1990s. A rich blend of modern myth and dark fantasy in which contemporary fiction, historical drama and legend are seamlessly interwoven, THE SANDMAN is also widely considered one of the most original and artistically ambitious series of the modern age. By the time it concluded in 1996, it had made significant contributions to the artistic maturity of comic books and become a pop culture phenomenon in its own right. Now, DC Comics is proud to present this comics classic in an all-new Absolute Edition format. The first of four beautifully designed slipcased volumes, THE ABSOLUTE SANDMAN VOL. 1 collects issues #1-20 of THE SANDMAN and features completely new coloring, approved by the author on the first 18 issues, as well as a host of never-before-seen extra material including the complete original Sandman proposal, a gallery of character designs from Gaiman and the artists who originated the look of the Sandman, and the original script for the World Fantasy Award-winning THE SANDMAN #19, "A Midsummer Night's Dream," together with reproductions of the issue's original pencils by Charles Vess. Also included are a new introduction by DC President & Publisher Paul Levitz and an afterword by Gaiman. * 612 pg, FC, $99.99 US * MATURE READERS

» Have you read this book? We'd like to know what you think about it - write a review about Absolute Sandman HC Vol 01 book by Neil Gaiman and you'll earn 50c in Boomerang Bucks loyalty dollars (you must be a Boomerang Books Account Holder - it's free to sign up and there are great benefits!)

Neil Gaiman is the New York Times bestselling author of the Newbery Medal-winning The Graveyard Book and Coraline, the basis for the hit movie. His other books include Anansi Boys, Neverwhere, American Gods, and Stardust, (winner of the American Library Association's Alex Award as one of 2000's top novels for young adults) as well as the short story collections M Is for Magic and Smoke and Mirrors. He is also the author of The Wolves in the Walls and The Day I Traded My Dad for Two Goldfish, both written for children. Among his many awards are the Eisner, the Hugo, the Nebula, the World Fantasy, and the Bram Stoker. Originally from England, he now lives in the United States. Sam Kieth was born in 1963 and started his professional career when he was seventeen. Later on he sold some work to DC Comics and Marvel, where he illustrated Wolverine. In 1987 Kieth drew the first five issues of Neil Gaiman's The Sandman and went on to create his own comic series called The Maxx, which was published by Image comics from 1993 until 1998. The success of the series spawned an award-winning cartoon on MTV, trading cards, a toy, and even some statues. This work is currently in print as graphic novels from DC's WildStorm imprint. Keith's recent work includes Wolverine/Hulk for Marvel Comics and Batman: Secrets and Scratch for DC Comics. He has also created several other creator-owned properties that have been published by WildStorm including Epicurus The Sage and Zero Girl.

A Preview for this title is currently not available.
More Books By Neil Gaiman
View All