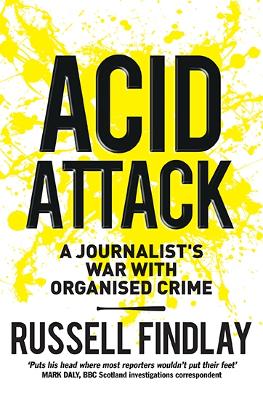 A Journalist's War with Organised Crime

Russell Findlay spent decades taking on the most dangerous men in Scotland's criminal underworld. Organised crime clans such as the Daniels, Lyons and McGoverns were unmasked by Findlay and his colleagues at the Sunday Mail and Scottish Sun. Also targeted were figures such as Paul Ferris, Frankie 'Donuts' Donaldson, Barry Hughes, James 'Jasper' McCann and Kevin 'Gerbil' Carroll.

Two days before Christmas 2015, Findlay became the target of an unprecedented attack. Disguised as a postman, William 'Basil' Burns came to the journalist's home and hurled sulphuric acid in his face. But Burns then lost control of his knife and was overpowered by Findlay who handed him over to the police. Taking the botched hit as his starting point, Findlay unravels the identity of those suspected of hiring Burns, at the same time giving a unique insight into the criminal landscape of modern Scotland and explaining how journalists risk their safety to expose dangerous and depraved crime bosses. In some cases it is not just criminals they are up against - police, lawyers and even others within the media can conspire to make their work even more dangerous.

» Have you read this book? We'd like to know what you think about it - write a review about Acid Attack book by Russell Findlay and you'll earn 50c in Boomerang Bucks loyalty dollars (you must be a Boomerang Books Account Holder - it's free to sign up and there are great benefits!)

Russell Findlay is a freelance writer who was formerly crime correspondent for the Sunday Mail and Scottish Sun.

A Preview for this title is currently not available.
More Books By Russell Findlay
View All