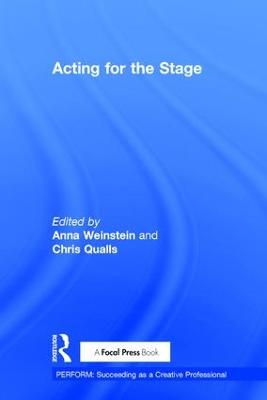 Acting for the Stage

Description - Acting for the Stage by Anna Weinstein

Acting for the Stage is a highly accessible guide to the business of theater acting, written for those interested in pursuing acting as a profession. This book is a collection of essays by and interviews with talented artists and businesspeople who have built successful careers in the theater; it's a goldmine of career advice that might take years to find on your own. Herein, the myths around professional acting are dispelled, and the mysteries revealed. Acting for the Stage illuminates practical strategies to help you build a life as a theater professional and find financial rewards and creative fulfillment in the process.

Other Editions - Acting for the Stage by Anna Weinstein 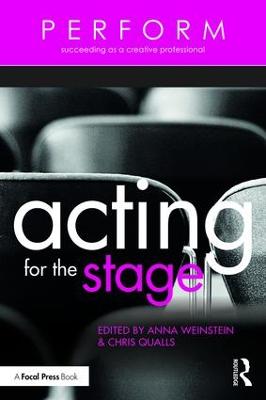 Book Reviews - Acting for the Stage by Anna Weinstein

» Have you read this book? We'd like to know what you think about it - write a review about Acting for the Stage book by Anna Weinstein and you'll earn 50c in Boomerang Bucks loyalty dollars (you must be a Boomerang Books Account Holder - it's free to sign up and there are great benefits!)

Anna Weinstein is the Series Editor for PERFORM. A writer and editor with over fifteen years of experience in educational publishing, she received her MFA in Writing for the Performing Arts from the University of California at Riverside--Palm Desert and her BA in Communication Studies/Performance from the University of North Carolina at Chapel Hill. She teaches introductory and advanced screenwriting at Auburn University, and she is a frequent contributor to Film International, where she publishes interviews with award-winning female directors in her series "Diva Directors Around the Globe." Chris Qualls is an Associate Professor of Theatre at Auburn University, where he teaches voiceover acting, acting for stage and screen, and introduction to theater. He received his MFA in Acting from the Alabama Shakespeare Festival and his BA in Communication Studies/Film from the University of North Carolina at Chapel Hill. He has worked as a voiceover actor for thirty years. His research and creative work focus on the integration of classical and nontraditional approaches to Shakespeare in performance, theater and media for social justice, and voice acting. He is a member of Actors' Equity Association.

A Preview for this title is currently not available.
More Books By Anna Weinstein
View All