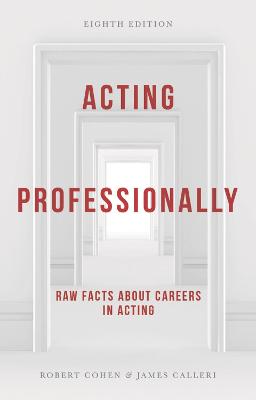 This vital resource will steer you through the hugely competitive industry of stage, film and TV acting, offering wise advice on everything from writing an eye-catching resume to finding an agent. It will give you a clear understanding of how acting careers are built and sustained, and how actors must position themselves in an environment overseen by directors, agents, casting directors and acting unions. Praised for its honest and critical understanding of the industry, the text has retained its status as the leading book in its field since the first edition published in 1972.

Acclaimed industry professional authors Robert Cohen and James Calleri offer vast insight and experience as professors, directors, playwrights and casting directors, making the text essential reading for all students and lecturers of Acting at universities, drama schools and conservatories, as well as anyone interested in pursuing and developing their career in acting.

» Have you read this book? We'd like to know what you think about it - write a review about Acting Professionally book by James Calleri and you'll earn 50c in Boomerang Bucks loyalty dollars (you must be a Boomerang Books Account Holder - it's free to sign up and there are great benefits!)

Robert Cohen is the founding chair of the drama department at the University of California, Irvine, USA, where he now serves as Clare Trevor Professor of Drama. He is author of the defining text Acting Power, and many other theatre books including Acting One, Advanced Acting, Acting in Shakespeare and Creative Play Direction. In 1999 he received the Career Achievement Award for Education from the Association for Theatre in Higher Education. He is a veteran stage director for Shakespeare festivals in the U.S. and abroad. James Calleri is President of Calleri Casting, and one of the most prominent casting directors in the USA. His casting credits include Broadway productions of Chicago, 33 Variations, A Raisin in the Sun and The Dead. His TV credits include Lipstick Jungle, Monk, Ed and Hope & Faith. He has been awarded twelve Artios Awards for outstanding achievement in casting and is a member of the Casting Society of America. He is also an Associate Professor of Acting at Columbia University, USA.