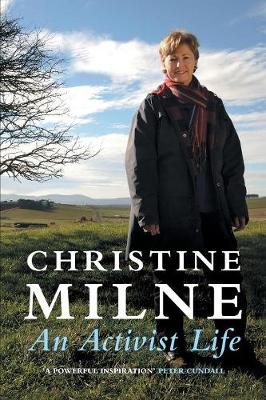 An Activist Life is the story of an apparently ordinary woman - a high-school English teacher from northwest Tasmania - who became a fiery environmental warrior, pitted against some of the most powerful business and political forces in the country.

In it, Christine Milne tells her story through the objects that have symbolic meaning in both her personal and political life, from the butter pats in her kitchen that represent her journey from farm girl at Wesley Vale to environmental and human rights activist at the national and global level, to the Pride t-shirt she wore walking in Mardi Gras next to her son, after years of fighting for the legal reform of gay rights in Tasmania. She describes how politics actually works- the deals, the promises kept and broken, the horse-trading and treachery involved in some of the most controversial and difficult issues of our time, including the attempts to forge a workable and effective climate change policy for Australia, and our treatment of refugees and asylum seekers.

This is a fascinating insider's account of what it means to be a woman in politics- the sacrifices of family life and relationships, the relentless misogyny and sexism that must be endured, the gritty conviction that you must never, ever give up the pursuit of the greater good. It is the story of Australian politics and the fight to save the world, and essential reading for anyone who cares about either.

» Have you read this book? We'd like to know what you think about it - write a review about Activist Life book by Christine Milne and you'll earn 50c in Boomerang Bucks loyalty dollars (you must be a Boomerang Books Account Holder - it's free to sign up and there are great benefits!)

Christine Milne was leader of the Australian Greens from 2012 to 2015. After growing up on a dairy farm at Wesley Vale, she attended boarding school in Hobart and obtained a Bachelor of Arts with Honours in History from the University of Tasmania. From 1975 to 1984 she worked as a secondary school teacher, teaching English, History and Social Science. She first came to public attention for her role in opposing the building of the Wesley Vale pulp mill near Bass Strait in North Western Tasmania on the basis of its environmental impact. She was arrested and jailed in 1983 while protesting the Franklin Dam. In 1993 she became the first woman to lead a political party in Tasmania, and led the Tasmanian Greens for five years through a period of significant reform in the areas of gun control, same-sex relationships and economic reform and at time of considerable turmoil in the forests. She was one of Australia's Bicentennial Women 88 Award winners, was appointed to the United Nations Global Roll 500 of Honor in 1990 for her conservation work, and was elected to the International Union for the Conservation of Nature Global Council in 2000. After finishing her decade-long senate career in 2015, she was appointed as an ambassador for the Global Greens.