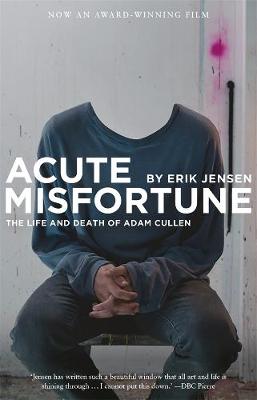 Acute Misfortune: The Life and Death of Adam Cullen

Description - Acute Misfortune: The Life and Death of Adam Cullen by Erik Jensen

In 2008, the artist Adam Cullen invited journalist Erik Jensen to stay in his spare room and write his biography.

What followed were four years of intense honesty and a relationship that became increasingly claustrophobic. At one point Cullen shot Jensen, in part to see how committed he was to the book. At another, he threw Jensen from a speeding motorbike. The book contract Cullen used to convince Jensen to stay with him never existed.

Acute Misfortune is a riveting account of the life and death of one of Australia's most celebrated artists, the man behind the Archibald Prize-winning portrait of David Wenham. Jensen follows Cullen through drug deals and periods of deep self-reflection, onwards into his court appearance for weapons possession and finally his death in 2012 at the age of forty-six.

After much critical acclaim, Acute Misfortune was developed into a feature film, winning The Age Critics Award at the Melbourne International Film Festival in 2018.

The story is by turns tender and horrifying- a spare tale of art, sex, drugs and childhood, told at close quarters and without judgement.

Other Editions - Acute Misfortune: The Life and Death of Adam Cullen by Erik Jensen » Have you read this book? We'd like to know what you think about it - write a review about Acute Misfortune: The Life and Death of Adam Cullen book by Erik Jensen and you'll earn 50c in Boomerang Bucks loyalty dollars (you must be a Boomerang Books Account Holder - it's free to sign up and there are great benefits!)


A Preview for this title is currently not available.
More Books By Erik Jensen
View All