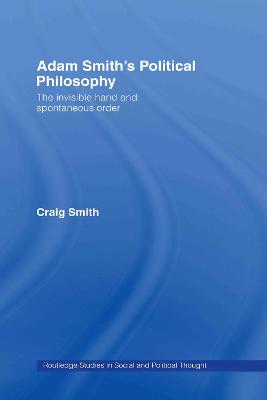 When Adam Smith published his celebrated writings on economics and moral philosophy he famously referred to the operation of an 'invisible hand'. Adam Smith's Political Philosophy makes visible this hand by examining its significance in Smith's political philosophy and relating it to similar concepts used by other philosophers, thus revealing a distinctive approach to social theory that stresses the importance of the unintended consequences of human action.

The first book to examine the history of Smith's political philosophy from this perspective, this work introduces greater conceptual clarity to the discussion of the invisible hand and the related notion of unintended order in the work of Smith, as well as in political theory more generally.

By examining the application of spontaneous order ideas in the work of Smith, Hume, Hayek and Popper, this important volume traces similarities in approach, and from these constructs a conceptual, composite model of an invisible hand argument. While setting out a clear framework of the idea of spontaneous order, the book also builds the case for using this as an explanatory social theory, with chapters on its application in the fields of science, moral philosophy, law and government. 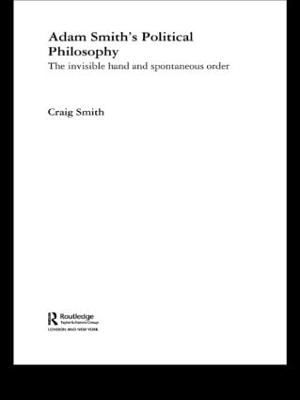 » Have you read this book? We'd like to know what you think about it - write a review about Adam Smith's Political Philosophy book by Craig Smith and you'll earn 50c in Boomerang Bucks loyalty dollars (you must be a Boomerang Books Account Holder - it's free to sign up and there are great benefits!)

A Preview for this title is currently not available.
More Books By Craig Smith
View All