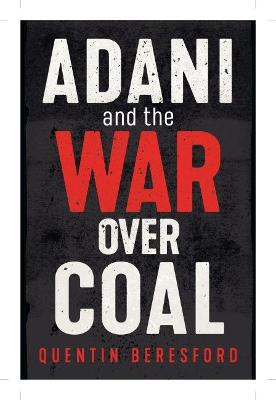 Adani and the War Over Coal

Description - Adani and the War Over Coal by Quentin Beresford

Coal is the political, economic and cultural totem for debates about climate change. Yet Australian politicians have had a love affair with coal, which has helped lock our politics - and our country - into the fossil fuel age.

This searing book takes apart the pivotal role of the Adani Carmichael mine in the conflict over coal. We see the rise of a fossil fuel power network linking mining companies, mining oligarchs, the big four banks, right-wing think tanks, lobby groups, the conservative media and all sides of Australian politics. On the other side, we have one of the biggest social movements ever seen in Australia in the form of #StopAdani uniting to try to save the Great Barrier Reef, native title rights and to fight the corrupt politics of coal.

Looking into the social, environmental and economic elements of this big fight, as well as the background of Gautam Adani himself, this book tells the full story of one of the lightning rod issues of our time.

'With his sharp insights, Beresford's rich documentation and exposition of events prosecute the extent to which Australia's major political parties have become a revolving door between government and resource corporations...Whatever it is that impels individuals to finally draw a line in the sand and take action against corruption, it is time for these diverse, brave stories to be told.' - Susan Reid, Australian Book Review

'Adani and the war over coal lifts the lid on a farrago of lies, deceit and brute cronyism infesting two great democracies.' - Bob Brown

'There are many big, bad projects the fossil fuel industry is pushing across the planet, but the Adani coal mine may be the biggest and stupidest of them all. To understand the roots of this debacle, and to remind you why it's necessary that we fight relentlessly to kill this project, this book is necessary reading.' - Bill McKibben, author The End of Nature

Other Editions - Adani and the War Over Coal by Quentin Beresford 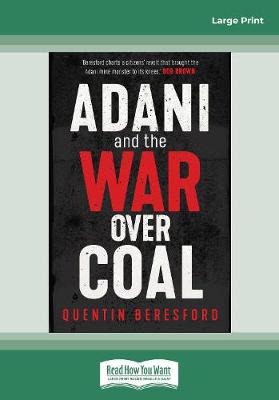 Book Reviews - Adani and the War Over Coal by Quentin Beresford

» Have you read this book? We'd like to know what you think about it - write a review about Adani and the War Over Coal book by Quentin Beresford and you'll earn 50c in Boomerang Bucks loyalty dollars (you must be a Boomerang Books Account Holder - it's free to sign up and there are great benefits!)


A Preview for this title is currently not available.
More Books By Quentin Beresford
View All