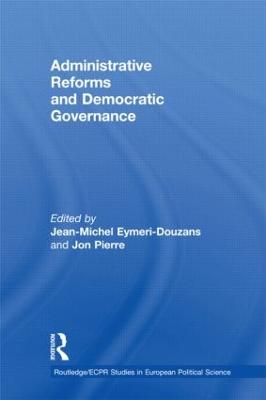 After a quarter of a century of implementation of New Public Management (NPM) reform strategies, this book assesses the major real outcomes of these reforms on states and public sectors, at both the organisational level and a more political level. Unlike most previous accounts of reform, this book looks at how reform has changed the role of the public administration in democratic governance. Featuring case studies on the UK, Germany, France, Norway, Ireland, Switzerland, Scandinavia, Post communist states, Mexico, South Korea, Turkey and the European Commission, and focusing on two issues this book: Examines the significant variations in the "trajectories" of administrative reform among West European countries on the basis of empirically rooted research on different national case studies. Assesses the extent to which these "constitutive" public policies have affected the institutions of government and the governing processes of our democratic occidental states and ask how have NPM-inspired programs, with their exclusive focus on managerialist objectives and instruments, challenged the political and democratic nature of public administration?
Looking at the broader issues relating to the current recompositions of democratic states, this book will be of interest to students and scholars of all matters relating to public administration and governance within political science, management, public law, sociology, contemporary history, and cultural studies.

» Have you read this book? We'd like to know what you think about it - write a review about Administrative Reforms and Democratic Governance book by Jean-Michel Eymeri-Douzans and you'll earn 50c in Boomerang Bucks loyalty dollars (you must be a Boomerang Books Account Holder - it's free to sign up and there are great benefits!)

Jon Pierre is Professor in Political Science at the University of Gothenburg, Sweden, and adjunct professor at University of Pittsburgh. He held a Chair in Politics at the University of Strathclyde between 1996 and 1999 and has held visiting scholarships or professorships in Hong Kong, Canberra, Montevideo and Nuffield College. In 2006, the Swedish Science Council awarded him a "long-term support for leading scholars". He is the author, co-author, editor or co-editor of twenty books including (ed) Debating Governance (Oxford University Press), Governance, Politics and the State (with B. Guy Peters, Palgrave, 2000), Handbook of Public Administration (Sage, 2003) and Handbook of Public Policy (Sage, 2006 (both co-edited with B. Guy Peters). He has published more than 70 chapters in edited volumes and 30 articles in peer-reviewed journals, mainly in the field of public administration and urban politics. He is a former editor of Governance and serves on eight journal editorial boards. Jean-Michel Eymeri-Douzans is Professor of Political Science at the interdisciplinary Institute of Political Studies (IEP) of Toulouse (south-west of France, second French city as regards the academia and number of students). In Toulouse, he has several managerial and research responsibilities: he is director of the research centre of the Institute, the Laboratory of the Social Sciences of Polity (LaSSP), director of the Master "Consultancy-Expertise-Public Action", chairman of the permanent Academic Recruitment Board of the Institute, member of the Board of Governors, of the Scientific Council, of the Council of the Doctoral School, etc.