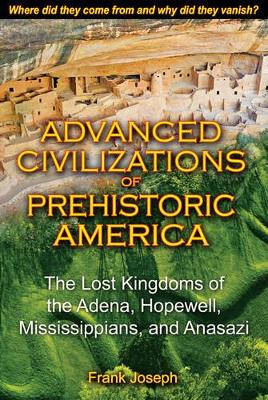 The Lost Kingdoms of the Adena, Hopewell, Mississippians, and Anasazi

* Describes the cultural splendor, political might, and incredibly advanced technology of these precursors to our modern age

Before Rome ruled the Classical World, gleaming stone pyramids stood amid smoking iron foundries from North America's Atlantic seaboard to the Mississippi River. On its east bank, across from today's St. Louis, Missouri, flourished a walled city more populous than London was one thousand years ago, with a pyramid larger--at its base--than Egypt's Great Pyramid. During the 12th century, hydraulic engineers laid out a massive irrigation network spanning the American Southwest that, if laid end to end, would stretch from Phoenix, Arizona, to the Canadian border. On a scale to match, they built a five-mile-wide dam from ten million cubic yards of rock. While Europe stumbled through the Dark Ages, a metropolis of weirdly shaped, multistory superstructures, precisely aligned to the sun and moon, sprawled across the New Mexico Desert.

Who was responsible for such colossal achievements? Where did their mysterious builders come from, and what became of them? These are some of the questions investigated by Frank Joseph in his examination of ancient influences at work on our continent. He reveals that modern civilization is not the first to arise in North America but was preceded instead by four high cultures that rose and fell over the past three thousand years: the Adena, Hopewell, Mississippian, and Anasazi-Hohokam. How they achieved greatness and why they vanished so completely are the intriguing enigmas explored by this unconventional prehistory of our country, Advanced Civilizations of Prehistoric America.

» Have you read this book? We'd like to know what you think about it - write a review about Advanced Civilizations of Prehistoric America book by Frank Joseph and you'll earn 50c in Boomerang Bucks loyalty dollars (you must be a Boomerang Books Account Holder - it's free to sign up and there are great benefits!)

Frank Joseph is the editor in chief of Ancient American magazine and the author of The Destruction of Atlantis, The Lost Civilization of Lemuria, Survivors of Atlantis and The Lost Treasure of King Juba.