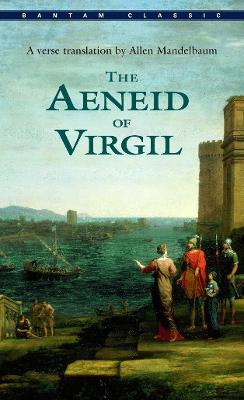 Aeneas flees the ashes of Troy to found the city of Rome and change forever the course of the Western world--as literature as well. Virgil's Aeneid is as eternal as Rome itself, a sweeping epic of arms and heroism--the searching portrait of a man caught between love and duty, human feeling and the force of fate--that has influenced writers for over 2,000 years. Filled with drama, passion, and the universal pathos that only a masterpiece can express. The Aeneid is a book for all the time and all people.

» Have you read this book? We'd like to know what you think about it - write a review about Aeneid Of Virgil book by Publius Vergilius Maro (Virgil) and you'll earn 50c in Boomerang Bucks loyalty dollars (you must be a Boomerang Books Account Holder - it's free to sign up and there are great benefits!)

Throughout his life Virgil was a poet and as far as we know had no interest in pursuing any other career. He was born Publius Vergilius Maro in 70 BC near Mantua, in what now is northern Italy. His parents, farm owners, were people of property and substance, if not wealth, and were able to obtain for their son a first-rate education. On completing his education, he returned home and possibly began work on the Eclogues, which appeared between the years of 42 and 37 BC. In 41 BC, the Emperor Octavian (later known as Augustus) confiscated Virgil's family's property, and Virgil was obliged to travel to Rome to negotiate for its return. Fortunately for Virgil, one of the officials secured for him an introduction to the emperor; not only was his land returned, but he also met Octavian's confidant Maecenas, who became Virgil's patron for the rest of his life. An industrious, meticulous writer, Virgil was not prolific. In addition to the ten Eclogues, which apparently took at least five years to publish, Virgil wrote the four Georgics, which took seven years, and the Aeneid, his great masterwork. Virgil worked on the Aeneid for eleven years, until his death in 19 BC. Feeling, apparently, that the epic was still unfinished, he directed in his will that the manuscript be destroyed. To the great fortune of succeeding generations, the emperor, Virgil's most prominent friend and admirer, intervened to countermand this provision. He turned the manuscript over to two of Virgil's friends, Varius and Tucca, to edit only obvious errors and repetitions, without adding to the text. The result of their work is the beautiful and brilliant Aeneid we have today. Allen Mendelbaum's five verse volumes are: Chelmaxions; The Savantasse of Montparnasse; Journeyman; Leaves of Absence; and A Lied of Letterpress. His volumes of verse translation include The Aeneid of Virgil, a University of California Press volume (now available from Bantam) for which he won a National Book Award; the Inferno, Purgatorio, and Paradiso volumes of the California Dante (now available from Bantam); The Odyssey of Homer (now available from Bantam); The Metamorphoses of Ovid, a finalist for the Pulitzer Prize in poetry; Ovid in Sicily; Selected Poems of Giuseppe Ungaretti; Selected Writings of Salvatore Quasimodo; and David Maria Turoldo. Mandelbaum is co-editor with Robert Richardson Jr. of Three Centuries of American Poetry (Bantam Books) and, with Yehuda Amichai, of the eight volumes of the JPS Jewish Poetry Series. After receiving his Ph.D. from Columbia, he was in the Society of Fellows at Harvard. While chairman of the Ph.D. program in English at the Graduate Center of CUNY, he was a visiting professor at Washington University in St. Louis, and at the universities of Houston, Denver, Colorado, and Purdue. His honorary degrees are from Notre Dame University, Purdue University, the University of Assino, and the University of Torino. He received the Gold Medal of Honor from the city of Florence in 2000, celebrating the 735th anniversary of Dante's birth, the only translator to be so honored; and in 2003 he received the President of Italy's award for translation. He is now Professor of the History of Literary Criticism at the University of Turin and the W.R. Kenan Professor of Humanities at Wake Forest University.

A Preview for this title is currently not available.
More Books By Publius Vergilius Maro (Virgil)
View All