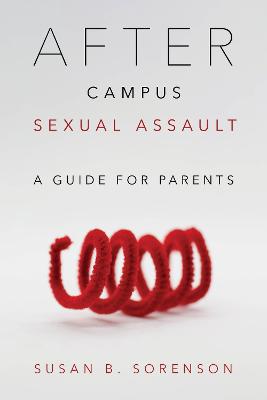 After Campus Sexual Assault: A Guide for Parents

Description - After Campus Sexual Assault: A Guide for Parents by Susan B. Sorenson

In 2015, a survey of more than 150,000 students revealed that over 20% of female undergraduates experienced "sexual conduct involving physical force or incapacitation" since starting college.1 Administrators, safety officers, and counselors are all acutely aware that campus sexual assault is a serious problem today.
This issue has also captured the general public's attention. Campus sexual assault is a focus of the media, including social media. On two recent consecutive Sundays, the New York Times published articles on the topic: a book review of Blurred Lines: Rethinking Sex, Power and Consent on Campus on September 17th and an Op-Ed piece entitled At the Frat House, Lessons About Rape on September 24th. Social media is exploding with personal stories of harassment and assault (e.g., #MeToo, #YesAllWomen, #NotOkay).

Organizations that share the goal of ending sexual violence include End Rape on Campus (www.endrapeoncampus.org), founded in 2013 by survivors of campus sexual assault, and It's On Us (www.itsonus.org), which was launched by then-President Obama in 2014 and works with students on over 500 college campuses. The Hunting Ground, a documentary about campus sexual assault, was nominated for two Emmy (R) Awards last year. Lady Gaga performed her song from the film - "Til It Happens to You" - at the awards ceremony.

Fewer than 28% of college students who have been sexually assaulted report the incident to campus authorities or the police.1 Do they tell their parents? If so, how do family members react?

Combining compassion with clinical expertise, Dr. Susan B. Sorenson set out to find the answers to these questions. After Campus Sexual Assault is the result of Dr. Sorenson's interviews with nearly 50 victims and their families as well as campus administrators. Quoting liberally from the interviews, this powerful book sheds light on how young women cope with sexual violence and how their loved ones may help the healing process.

Obviously, efforts to reduce sexual assault on campus are important. Perhaps less obvious, but equally significant, is the need to give a voice to those who have been victimized. After Campus Sexual Assault provides a unique platform for vulnerable victims as well as a critical source of information for their friends and families.

Buy After Campus Sexual Assault: A Guide for Parents by Susan B. Sorenson from Australia's Online Independent Bookstore, Boomerang Books.

Book Reviews - After Campus Sexual Assault: A Guide for Parents by Susan B. Sorenson

» Have you read this book? We'd like to know what you think about it - write a review about After Campus Sexual Assault: A Guide for Parents book by Susan B. Sorenson and you'll earn 50c in Boomerang Bucks loyalty dollars (you must be a Boomerang Books Account Holder - it's free to sign up and there are great benefits!)