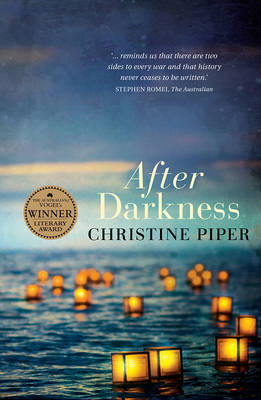 Description - After Darkness by Christine Piper

The winner of The Australian/Vogel's Literary Award 2014

It is early 1942 and Australia is in the midst of war.

While working at a Japanese hospital in the pearling port of Broome, Dr Ibaraki is arrested as an enemy alien and sent to Loveday internment camp in a remote corner of South Australia. There, he learns to live among a group of men who are divided by culture and allegiance. As tensions at the isolated camp escalate, the doctor's long- held beliefs are thrown into question and he is forced to confront his dark past: the promise he made in Japan and its devastating consequences.

'Piper draws us deeper and deeper into the compelling story of Tomakazu Ibaraki, a man whose strengths - discretion, honour and loyalty - also lie at the heart of his personal tragedy.' - Danielle Wood, winner of the The Australian/Vogel's Literary Award in 2002; Vogel's judge

'After Darkness is about friendships that transcend cliched notions of mateship. It's also about a man silenced by a promise . a haunting novel that lingers in a most unsettling way.' - Fiona Stager, bookseller, Avid Reader; Vogel's judge

'A brave, profound meditation on identity, trauma, loss and courage . A novel that demands its place alongside Richard Flanagan's The Narrow Road to the Deep North and Mark Dapin's Spirit House.' - Stephen Romei, literary editor, The Australian; Vogel's judge

» Have you read this book? We'd like to know what you think about it - write a review about After Darkness book by Christine Piper and you'll earn 50c in Boomerang Bucks loyalty dollars (you must be a Boomerang Books Account Holder - it's free to sign up and there are great benefits!)

Christine Piper's short fiction has been published in Seizure, SWAMP and Things That Are Found In Trees and Other Stories. She was the 2013 Alice Hayes writing fellow at Ragdale in the United States. Christine has studied creative writing at Macquarie University, the Iowa Writers' Workshop and the University of Technology, Sydney, where she wrote a version of this novel as part of her doctoral degree. She has also worked as a magazine editor and writer for more than a decade. Born in South Korea in 1979 to an Australian father and a Japanese mother, Christine moved to Australia when she was one. She has previously taught English and studied Japanese in Japan, and currently lives in New York with her husband. Christine is also the 2014 recipient of the ABR Calibre Prize for an Outstanding Essay. The winner of The Australian/Vogel's Literary Prize 2014. After Darkness is Christine Piper's first novel. She was also shortlisted for the Readings New Australian Writing Award 2014.