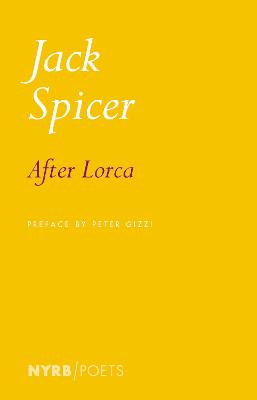 Description - After Lorca by Jack Spicer

Out of print for decades, this is the legendary American poet's tribute to Federico Garcia Lorca, including translations of the great Spanish poet's work.

Jack Spicer was one of the outstanding figures of the mid-twentieth-century San Francisco Renaissance, bent on fashioning a visionary new lyricism. Spicer called his poems "dictations," and they combine outrageous humor, acid intelligence, brilliant wordplay, and sheer desolation to incandescent effect.

"Frankly I was quite surprised when Mr. Spicer asked me to write an introduction to this volume," writes the dead Federico Garcia Lorca at the start of After Lorca, Spicer's first book and one that, since it originally appeared in 1957, has exerted a powerful influence on poetry in America and abroad. "It must be made clear at the start that these poems are not translations," Lorca continues. "In even the most literal of them Mr. Spicer seems to derive pleasure in inserting or substituting one or two words which completely change the mood and often the meaning of the poem as I had written it. More often he takes one of my poems and adjoins to half of it another of his own, giving rather the effect of an unwilling centaur. (Modesty forbids me to speculate which end of the animal is mine.) Finally there are an almost equal number of poems that I did not write at all (one supposes that they must be his)." What so puzzles Lorca continues to delight and inspire readers of poetry today.

» Have you read this book? We'd like to know what you think about it - write a review about After Lorca book by Jack Spicer and you'll earn 50c in Boomerang Bucks loyalty dollars (you must be a Boomerang Books Account Holder - it's free to sign up and there are great benefits!)


A Preview for this title is currently not available.
More Books By Jack Spicer
View All