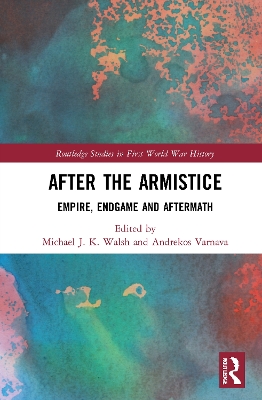 After the Armistice: Empire, Endgame and Aftermath

Description - After the Armistice: Empire, Endgame and Aftermath by Michael J. K. Walsh

A century after the Armistice and the associated peace agreements that formally ended the Great War, many issues pertaining to the UK and its empire are yet to be satisfactorily resolved. Accordingly, this volume presents a multi-disciplinary approach to better understanding the post-Armistice Empire across a broad spectrum of disciplines, geographies and chronologies. Through the lens of diplomatic, social, cultural, historical and economic analysis, the chapters engage with the histories of Lagos and Tonga, Cyprus and China, as well as more obvious geographies of empire such as Ireland, India and Australia. Though globally diverse, and encompassing much of the post-Armistice century, the studies are nevertheless united by three common themes: the interrogation of that transitionary 'moment' after the Armistice that lingered well beyond the final Treaty of Lausanne in 1924; the utilisation of new research methods and avenues of enquiry to compliment extant debates concerning the legacies of colonialism and nationalism; and the common leitmotif of the British Empire in all its political and cultural complexity. The centenary of the Armistice offers a timely occasion on which to present these studies.

» Have you read this book? We'd like to know what you think about it - write a review about After the Armistice: Empire, Endgame and Aftermath book by Michael J. K. Walsh and you'll earn 50c in Boomerang Bucks loyalty dollars (you must be a Boomerang Books Account Holder - it's free to sign up and there are great benefits!)


A Preview for this title is currently not available.
More Books By Michael J. K. Walsh
View All