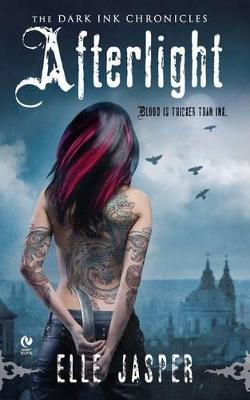 There is a reason we fear the night . . . As Savannah's most unconventional tattoo artist, Riley Poe is quite familiar with the local underground scene. She lives and works on the edge of it every day. Now she's about to step over the edge. When her younger brother is taken by a sinister cult led by centuries-old vampires, Riley discovers a world of shadows and blood-and those who exist there. Her ally is the hot-tempered vampire Eli Dupre, who is attracted to Riley's beauty as well as to her one-of-a-kind blood type-a blood type he is not alone in craving. To save her brother from certain undeath, Riley faces dangers she's never dreamed of, ruthless bloodthirsty enemies, and an evil of endless hunger that wants to devour all in its vile grasp. For more about the author visit ellejasper.com

» Have you read this book? We'd like to know what you think about it - write a review about Afterlight book by Elle Jasper and you'll earn 50c in Boomerang Bucks loyalty dollars (you must be a Boomerang Books Account Holder - it's free to sign up and there are great benefits!)

What do you get when you combine a kick-ass female with a wild past and a two-centuries-old sexy male vampire originated from France? You get Afterlight, of course! Elle Jasper's debut is wicked cool! In this book, Elle shows readers the darker, creepier side of Savannah, Georgia, besides adding her own touch of Gothic elements in it. You can observe it in Riley's dressing code and fashion sense.

Riley Poe is an amazing heroine. She's spunky, badass, witty and loves her brother a great deal. I'd really like to see the dragon tattoo on her back and arms if she were a real person. She has a soft spot for her younger brother Seth, whom she cares for since her mother died. She always calls him "my baby brother" and I think that is cute, since I did the same with mine.

When Seth and his friends disrupts an ancient stone in Savannah's Bonaventure Cemetery, they accidentally release two evil, powerful vampires --- Victorian and Valerian, descendants of the Strigoi. Then, all hell breaks loose. The two evil vampires, Victorian and Valerian, are out for blood, and they are using Seth and his friends to do lure victims.

To save her brother from eternal damnation, Riley seeks help from her surrogate grandfather, the Preacher, who is a Gullah conjurer. His grandfather introduces her to the Dupre family, who agrees to aid her in saving Seth. But there's something strange about the Dupres. They possess amazing speed, and they can change into terrifying monsters in a blink of the eye. They are actually vampires. And Eli Dupre, one of them, has been ordered to act as her personal bodyguard. As time passes, the mutual attraction between them heightened.

Eli Dupre is like the perfect guy, he's hot, handsome and protective. But he can be pretty scary too, when he gets angry or hungry. He grows fond of Riley, and eventually falls in love with her despite the fact that they are two different persons from two different worlds.

Elle Jasper is a talented writer. She weaves the tale perfectly, and ends each chapter with a surprise. I was eager to continue reading and stopped only when my eyes cannot resist the urge to rest. The setting is written in detail, giving me a clear mental image of the charms of the historical sites in Savannah. There is a quote that reminds me of Twilight, but that's a small thing. I loved the book nevertheless. I'm definitely looking forward to reading the second book in The Dark Ink Chronicles, Everdark!

Elle Jasper spent her youth buried in the pages of Mary Shelley, Edgar Allan Poe, Bram Stoker, and Stephen King. Now a full-time writer, she lives in and continues to be inspired by the Gothic Revival and Georgian architecture, moss-draped squares, and ancient cobbles of Savannah, Georgia.

A Preview for this title is currently not available.
More Books By Elle Jasper
View All