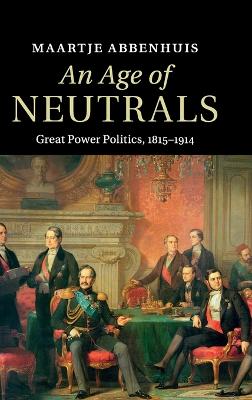 An Age of Neutrals

Description - An Age of Neutrals by Maartje Abbenhuis

An Age of Neutrals provides a pioneering history of neutrality in Europe and the wider world between the Congress of Vienna and the outbreak of the First World War. The 'long' nineteenth century (1815-1914) was an era of unprecedented industrialization, imperialism and globalization; one which witnessed Europe's economic and political hegemony across the world. Dr Maartje Abbenhuis explores the ways in which neutrality reinforced these interconnected developments. She argues that a passive conception of neutrality has thus far prevented historians from understanding the high regard with which neutrality, as a tool of diplomacy and statecraft and as a popular ideal with numerous applications, was held. This compelling new history exposes neutrality as a vibrant and essential part of the nineteenth-century international system; a powerful instrument used by great and small powers to solve disputes, stabilize international relations and promote a variety of interests within and outside the continent.

Book Reviews - An Age of Neutrals by Maartje Abbenhuis

» Have you read this book? We'd like to know what you think about it - write a review about Age of Neutrals book by Maartje Abbenhuis and you'll earn 50c in Boomerang Bucks loyalty dollars (you must be a Boomerang Books Account Holder - it's free to sign up and there are great benefits!)

Maartje Abbenhuis is Senior Lecturer in Modern European History at the University of Auckland in New Zealand, where she has worked since 2003. She completed her PhD in History at the University of Canterbury, New Zealand, in 2001. Her research interests lie in the history of neutrality and internationalism, especially in the period 1815 to 1918, the history of borderlands, and popular representations of Nazism. She has published widely on the history of the Netherlands in the First World War and co-edited two interdisciplinary collections, one on non-combatants and the other on Nazism in post-1945 popular culture. She was the recipient of two prestigious Royal Society of New Zealand Marsden Grants (one in 2004, the other in 2013) as well as a University of Auckland Early Career Excellence Award in 2008. The Faculty of Arts at the University of Auckland awarded her an Early Career Teaching Excellence Award in 2006 and a Sustained Excellence in Teaching Award in 2013. She is a member of several history associations including the Royal Dutch Historical Association, the New Zealand Historical Association and the Australasian Association of European Historians.

A Preview for this title is currently not available.
More Books By Maartje Abbenhuis
View All