Moscow, 1965. Former Secret Service agent Leo Demidov is forbidden to travel with his wife and daughters to New York as part of a 'Peace Tour', meant to foster better relations between the two Cold War enemies. Leo's natural paranoia reaches its peak: Why have his family been selected? What is being planned?

When Leo's worst fears are realised and a tragic murder destroys everything he loves, he demands only one thing: that he is allowed to investigate and find the killer who has struck at the heart of his family. Crippled by grief, his request denied, Leo sees no other option than to take matters into his own hands, thousands of miles from the crime scene.

In a surprising, thrilling story that spans decades and continents - from the backstreets of 1960s New York to the mountains of Afghanistan in the 1980s - Leo will stop at nothing as he hunts the one person who knows the truth: Agent 6. 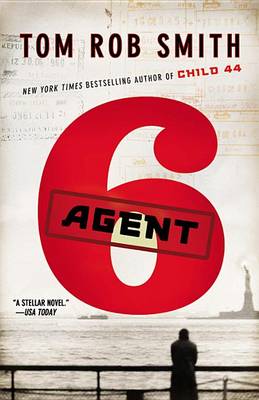 » Have you read this book? We'd like to know what you think about it - write a review about Agent 6 book by Tom Rob Smith and you'll earn 50c in Boomerang Bucks loyalty dollars (you must be a Boomerang Books Account Holder - it's free to sign up and there are great benefits!)

Born in 1979 to a Swedish mother and an English father, Tom Rob Smith's bestselling novels in the Child 44 trilogy were international publishing sensations. Among its many honours, Child 44 won the International Thriller Writer Award for Best First Novel, the Galaxy Book Award for Best New Writer, the CWA Ian Fleming Steel Dagger Award, and was longlisted for the Man Booker Prize and shortlisted for the Costa First Novel Award and the inaugural Desmond Elliot Prize. Child 44 is now a major motion picture starring Tom Hardy, Noomi Rapace and Gary Oldman.

A Preview for this title is currently not available.
More Books By Tom Rob Smith
View All