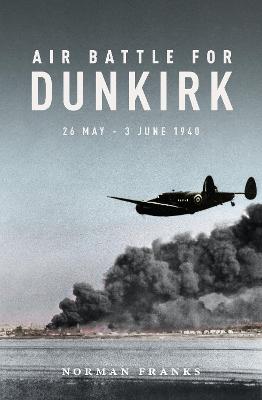 With the epic blockbuster film Dunkirk, to be released in July 2017, directed by Christopher Nolan and starring, amongst others, Kenneth Branagh, Tom Hardy and Mark Rylance, this reissue has never been more timely. 'Where is the RAF?' was the oft-quoted question asked by soldiers waiting on the beach at Dunkirk, to where they had retreated following the German blitzkrieg through northern France, and where they were now being pounded by the Luftwaffe. The air forces were there, as Norman Franks proves, detailing the outstanding achievements of the Allied pilots who fought, using outmoded tactics, against enemy pilots who had earlier had easy victories over the Polish, Dutch and Belgian air forces. The RAF's achievement reminds us just how close Britain came to disaster in June 1940. REVIEWS: 'An absorbing read, which vindicates the RAF' - RAF Historical Journal 'This book reminds us of the debt to those who fought in 1940, and that holding the thin line over Dunkirk directly led to the later victory in the Battle of Britain' - RUSI Journal

» Have you read this book? We'd like to know what you think about it - write a review about Air Battle for Dunkirk book by Norman Franks and you'll earn 50c in Boomerang Bucks loyalty dollars (you must be a Boomerang Books Account Holder - it's free to sign up and there are great benefits!)


A Preview for this title is currently not available.
More Books By Norman Franks
View All