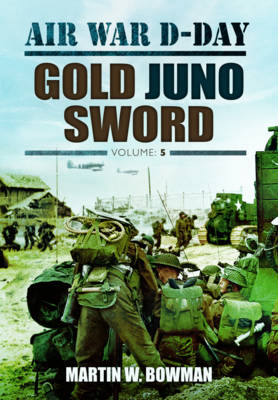 This is the final volume of a comprehensive five part work, including a multitude of personal accounts of every aspect of the aerial operations on 'Gold' 'Juno and 'Sword' beaches during D-Day. It relays the sense of relief experienced as Allied troops gained a foothold on the continent of Europe after D-Day, both by the men caught up in the proceedings and the jubilant civilians on the home front. By the end of June 875,000 men had landed in Normandy; 16 divisions each for the American and British armies. Although the Allies were well established on the coast and possessed all the Cotentin Peninsular, the Americans had still not taken St Lo, nor the British and Canadians the town of Caen, originally a target for D-Day. German resistance, particularly around Caen was ferocious, but the end result would be similar to the Tunisian campaign. More and more well-trained German troops were thrown into the battle, so that when the Allies did break out of Normandy, the defenders lost heavily and lacked the men to stop the Allied forces from almost reaching the borders of Germany. In continuing style, Bowman pays respects to the men who fought in the skies above France on D-Day. This episode of Aviation history has never before been the focus of such detailed analysis; the five volumes of this series act as a memorial to the individuals who played their own individual parts in the wider proceedings. Far from being a mere operational record, this is the story of the men behind the headlines, the reality behind the iconic images of parachute drops and glider formations. AUTHOR: Martin Bowman is one of Britain's foremost aviation historians and has written many books and articles. SELLING POINTS: Fifth and final volume in an impressive five part work A comprehensive tribute and engaging history of aerial operations implemented during the course of D-Day Relays the exploits of the men engaged in the conflict at hand with ease, style and reverence ILLUSTRATIONS: 60 images

» Have you read this book? We'd like to know what you think about it - write a review about Air War D-Day: Gold Juno Sword book by Martin Bowman and you'll earn 50c in Boomerang Bucks loyalty dollars (you must be a Boomerang Books Account Holder - it's free to sign up and there are great benefits!)

Martin Bowman is one of Britain's leading aviation authors and has written a multitude of books on World War Two and other conflicts since. Among the many titles that he has written, Pen and Sword have published The Men Who Flew The Mosquito, Duxford and the Big Wings; several guides to World War two airfields in the 'Aviation Heritage Series', The Mighty Eighth At War; Legend of the Lancasters; Mosquito Mayhem, Bomber Command: Reflections of War and Air War D-Day; The First Steps To Victory. He lives in Norwich in Norfolk and is a former member of the 6th Battalion, The Royal Anglian Regiment (TAVR).