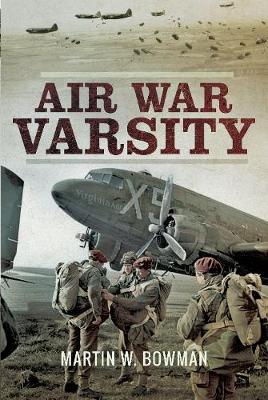 Here, Martin Bowman brings us the first book on Operation Varsity to include both British and US air and ground operations, as well as the US, British and Canadian paratroop and resupply missions, all presented together in one ambitious volume. Operation Varsity-Plunder , the last large-scale Allied airborne operation of World War II, was certainly no walk-over. Varsity was the airborne part, whilst Plunder represented the British amphibious operations by the British Second Army. The airlift consisted of 541 transport aircraft containing airborne troops and a further 1,050 troop-carriers towing 1,350 gliders. The American 17th Airborne Division s C-46 Commando transports and Waco gliders joined the British 6th Airborne Division C-54s, C-47 transport aircrafts, Horsas and Hamilcar gliders to form an immense armada that stretched for more than 200 miles across the sky. The successful air attack involved more than 10,000 Allied aircraft and was concentrated primarily on Luftwaffe airfields and the German transportation system. The combination of the two divisions in one lift made this the largest single day airborne drop in history.In this impressive account, Martin Bowman weaves first-hand testimony and a compelling historical narrative together with a variety of photographic illustrations, many of which have never been published before, in order to create a complete and fascinating record of events as they played out in March 1945. AUTHOR: Martin Bowman is one of Britain's leading aviation authors and has written a great deal of books focusing on aspects of Second World War aviation history. He lives in Norwich in Norfolk. 60 illustrations

» Have you read this book? We'd like to know what you think about it - write a review about Air War Varsity book by Martin W. Bowman and you'll earn 50c in Boomerang Bucks loyalty dollars (you must be a Boomerang Books Account Holder - it's free to sign up and there are great benefits!)

Martin Bowman is one of Britain's leading aviation authors and has written a great deal of books focusing on aspects of Second World War aviation history. He lives in Norwich in Norfolk.

A Preview for this title is currently not available.
More Books By Martin W. Bowman
View All