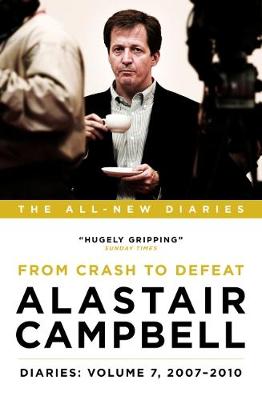 Alastair Campbell's diaries have the quality of Pepys ... people will be looking for insights and finding them in 100 years' time." Lord Alex Carlile

Caught in the no man's land between being a key figure in Downing Street and the relative anonymity of the world outside politics, Alastair Campbell finds himself being torn in several directions. Having succeeded Tony Blair as Prime Minister, Gordon Brown wants Campbell at his side. Campbell resists, flooding his reservoir of guilt as a general election looms and Brown's indecision and fluctuating moods suggest the Labour administration is seriously threatened by the Tory 'posh boy', David Cameron.

Soon Campbell is earning not only praise but big money from motivational speaking and writing novels which darkly reflect the personal mood swings that continue to concern to both him and his family. Serious journalism across platforms old and new puts him back in the public eye and together with live appearances and a love of sport - his enduring love affair with Burnley Football Club still smoulders - sees him board a celebrity merry-go-round that often leaves him far from his comfort zone.

With politics constantly tugging his sleeve, he eventually returns to the front line to marshal a party in disarray. The intensity of the months leading up to 6 May 2010 is as dramatic as any screenplay, with Campbell chronicling Brown's struggle to win over a disillusioned nation and then his dignified departure from the main stage. For Campbell, another chapter closes. So what next?

» Have you read this book? We'd like to know what you think about it - write a review about Alastair Campbell Diaries: Volume 7 book by Alastair Campbell and you'll earn 50c in Boomerang Bucks loyalty dollars (you must be a Boomerang Books Account Holder - it's free to sign up and there are great benefits!)

Alastair Campbell was born in Keighley, Yorkshire in 1957, the son of a vet. Having graduated from Cambridge University in modern languages, he went into journalism, principally with the Mirror Group. When Tony Blair became leader of the Labour Party, Campbell worked for him first as press secretary, then as official spokesman and director of communications and strategy from 1994 to 2003. He continued to act as an advisor to Mr Blair and the Labour Party, including during the 2005 and subsequent election campaigns. He is now engaged mainly in writing, public speaking and consultancy and is an ambassador for a number of mental health charities. He lives in north London with his partner of thirty-seven years, Fiona Millar, with whom he has three grown-up children. His interests include running, cycling, playing the bagpipes and following the varying fortunes of Burnley Football Club. This is his twelfth book since leaving Downing Street.

Happy Depressive: In Pursuit of Personal and Political Happiness
$18.93 $21.03