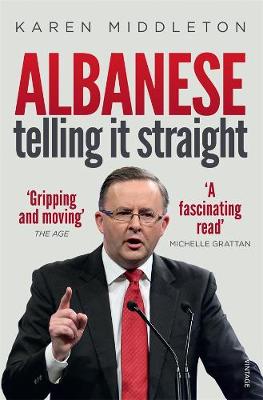 Anthony Albanese has been at the heart of Labor politics in Australia for a decade. For the previous decade he persistently worked to ensure that the Labor left was a vital part of all ALP activities. This is his story. The turbulent years of federal politics with a deeply personal dimension, this is the whole story of Anthony Albanese and the remarkable mother, Maryanne, who raised him.

Anthony learned his political craft among the tough men and women of NSW Labor, inheriting his mother's devotion to social justice, the South Sydney Rabbitohs and the party his family had served for three generations.

ALBANESE- Telling it Straight reveals what shaped the bloke they call 'Albo', his climb through politics by playing hard, fast and sometimes loose and how as he and his colleagues wrestled with Labor's future, he discovered his own past.

Other Editions - Albanese by Karen Middleton 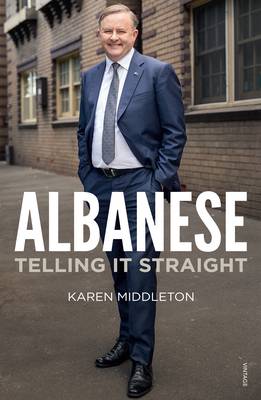 » Have you read this book? We'd like to know what you think about it - write a review about Albanese book by Karen Middleton and you'll earn 50c in Boomerang Bucks loyalty dollars (you must be a Boomerang Books Account Holder - it's free to sign up and there are great benefits!)

Karen Middleton is Chief Political Correspondent at the Saturday Paper. Canberra-based she is a journalist, writer and broadcaster who has covered national and international affairs for almost 30 years. Her first book, An Unwinnable War - Australia in Afghanistan, was published in 2011 and tells the political back story to our longest military conflict - how John Howard's presence in Washington DC on September 11, 2001, led to Australia spending the next decade at war. Karen was Chief Political Correspondent for SBS television for 10 years and before that was Political Editor for The West Australian and Foreign Affairs and Defence Correspondent for The Age. She is a regular panellist on ABC TV's Insiders program and on ABC radio, a commentator on Radio New Zealand and Monocle 24 radio in the UK and currently contributes to the BBC online and The Australian Women's Weekly magazine in print and online. Karen has been a past contributor to The New York Times, CNBC and al Jazeera. She is also an occasional lecturer at the Australian Defence Force Academy, University of New South Wales, in its Executive Education Program. As a volunteer, Karen has helped settle refugees in Australia and has designed a creative writing program for soldiers experiencing post-traumatic stress, to be delivered in 2016. She was a co-founder a chief lyricist for the Parliamentary Press Gallery's satirical singers, The House Howlers.

A Preview for this title is currently not available.
More Books By Karen Middleton
View All