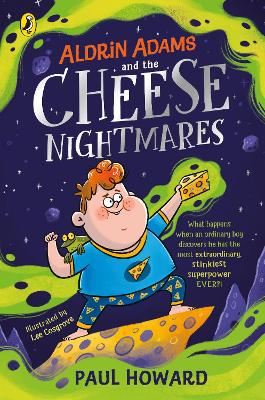 Aldrin Adams and the Cheese Nightmares

Description - Aldrin Adams and the Cheese Nightmares by Paul Howard

Aldrin Adams is an ordinary boy with an extraordinary superpower. When he eats cheese, just before he goes to sleep at night, he can enter into other people's dreams . . . and their nightmares!

But why has he, of all people, been given this ability? What is he supposed to do with it? And why doesn't it come with some kind of instruction manual that explains how it works?

There are so many questions that require answers.

Luckily, Aldrin's dad owns the biggest and finest cheesemonger's for miles and miles around, offering him unlimited access to some of the stinkiest cheeses in the world as he tries to figure it all out.

What Aldrin doesn't realise, as he embarks on his journey of discovery, is that he is being watched by Habeas Grusselvart, a mysterious, supernatural villain who creates nightmares for millions and millions of children every night. Suddenly, a young boy poses a threat to his plans to control the world through fear. Which is why he must be stopped - at all costs!

Join Aldrin Adams on an unforgettable adventure as he steps into a world of mystery and magic and cheeses that seriously, SERIOUSLY pong!

Other Editions - Aldrin Adams and the Cheese Nightmares by Paul Howard » Have you read this book? We'd like to know what you think about it - write a review about Aldrin Adams and the Cheese Nightmares book by Paul Howard and you'll earn 50c in Boomerang Bucks loyalty dollars (you must be a Boomerang Books Account Holder - it's free to sign up and there are great benefits!)

I Read the News Today, Oh Boy: The short and gilded life of Tara Browne, the man who inspired The Beatles' greatest song
$31.25 $34.72