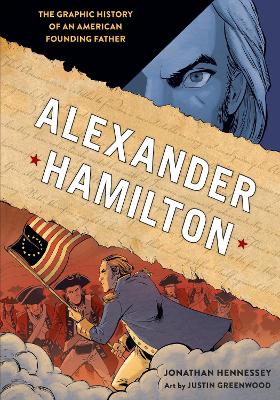 A graphic novel biography of the American legend who inspired the hit Broadway musicalHamilton.

Alexander Hamilton was one of the most influential figures in United States history-he fought in the Revolutionary War, helped develop the Constitution, and as the first Secretary of the Treasury established landmark economic policy that we still use today. Cut down by a bullet from political rival Aaron Burr, Hamilton has since been immortalized alongside other Founding Fathers such as George Washington and Thomas Jefferson-his likeness even appears on the ten-dollar bill. In this fully-illustrated and impeccably researched graphic novel-style history, author Jonathan Hennessey and comic book illustrator Justin Greenwood bring Alexander Hamilton's world to life, telling the story of this improbable hero who helped shape the United States of America. » Have you read this book? We'd like to know what you think about it - write a review about Alexander Hamilton book by Riley Elliott and you'll earn 50c in Boomerang Bucks loyalty dollars (you must be a Boomerang Books Account Holder - it's free to sign up and there are great benefits!)

JONATHAN HENNESSEY is the author of three previous nonfiction graphic novels, The United States Constitution, The Gettysburg Address, The Comic Book Story of Beer, and The Comic Book Story of Video Games. He is also the writer of the history-based time travel series Epochalypse. Based in Los Angeles, he works in film and television. JUSTIN GREENWOOD is a Bay Area-based comic book illustrator known for his work on creator-owned comic book series like The Fuse, Stumptown, Wasteland, and Resurrection.

A Preview for this title is currently not available.
More Books By Riley Elliott
View All