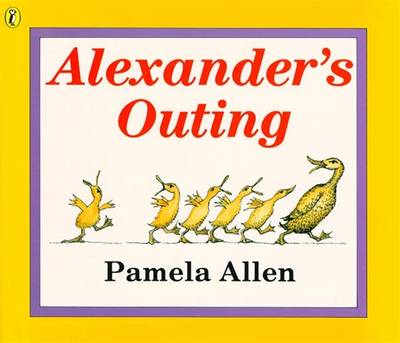 'Stay close, take care,' quacked Alexander's mother. But Alexander was a wayward duckling - he straggled behind ... and disappeared down a deep dark hole ...

» Have you read this book? We'd like to know what you think about it - write a review about Alexander's Outing book by Pamela Allen and you'll earn 50c in Boomerang Bucks loyalty dollars (you must be a Boomerang Books Account Holder - it's free to sign up and there are great benefits!)

Alexander's Outing is a fun book to read about a little duckling who wasn't having the best day.

One day when all the Duckling were following their Mother on the way to the Pond, Alexander accidentally fell down a hole, of course he couldn't fly out and his Mother couldn't rescue him. Eventually a group of passers by stopped to offer assistance and tried all sorts of creative way to get the poor duck out.

The story is fun and in a way teaches children around brain storming and working together. Nicely illustrated another fine Pamela Allen book.