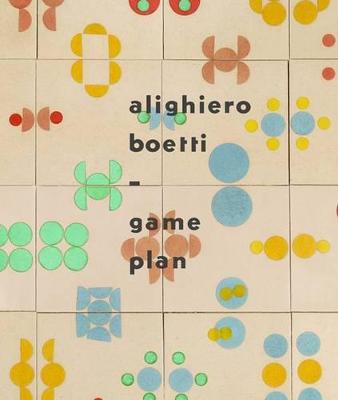 Alighiero Boetti (1940-1994) was one of the most innovative artists of the twentieth century. Originally associated with the Arte Povera group in Turin, in the 1960s he made works using materials sourced in hardware stores, shifting by 1970 to create art using drawing, Biro pens, newspaper images and artist's books. Based in Rome, he travelled constantly to distant destinations including Guatemala, Ethiopia, Japan, and, most frequently, Kabul, in Afghanistan. It was in Kabul that he set up a hotel and commissioned artisans to create embroideries, most famously his 'mappe', intricate maps of the world coloured according to political affiliation. Boetti's work is always poetic and playful, and he enjoyed creating different kinds of games involving time patterns and numeric sequences. At the same time he remained in touch with and inspired by the world around him, responsive to the complex political shifts that took place during the 1970s and '80s.
Published on the occasion of a major touring exhibition, this comprehensive, lavishly illustrated overview brings together leading international critics and curators, each examining a different aspect of Boetti's achievements, together helping to explain why he remains both influential and inspiring nearly two decades after his death.

» Have you read this book? We'd like to know what you think about it - write a review about Alighiero Boetti:Game Plan book by Lynne Cooke and you'll earn 50c in Boomerang Bucks loyalty dollars (you must be a Boomerang Books Account Holder - it's free to sign up and there are great benefits!)

A Preview for this title is currently not available.
More Books By Lynne Cooke
View All