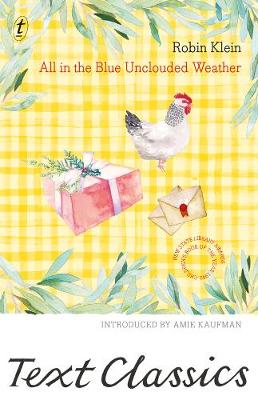 All In The Blue Unclouded Weather

Description - All In The Blue Unclouded Weather by Robin Klein

All in the Blue Unclouded Weather begins the story of the Melling sisters, four girls growing up in an Australian country town in the post war years. Vivienne is the youngest, always the last to wear the hand-me-down clothes - after Grace and Heather and Cathy - and always longing for something new and special. But although life is hard for the Melling family and the sisters have their tiffs, this is a heartwarming and often humorous story of loyalty and affection - under blue unclouded skies.

Book Reviews - All In The Blue Unclouded Weather by Robin Klein

» Have you read this book? We'd like to know what you think about it - write a review about All In The Blue Unclouded Weather book by Robin Klein and you'll earn 50c in Boomerang Bucks loyalty dollars (you must be a Boomerang Books Account Holder - it's free to sign up and there are great benefits!)