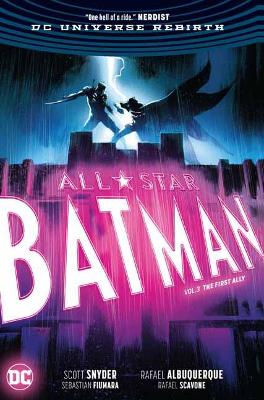 In the third volume of Scott Snyder's best-selling ALL-STAR BATMAN, a rotating team of all-star artists join the Bat-scribe to tell tales featuring some of Batman's most deadly foes! For more than 75 years, Batman has been one of the most widely recognized and revered superheroes in all of comics. But what would the Dark Knight be without an equally iconic roster of villains to keep him fighting all these years?

When the Dark Knight is taken down by a new enemy whose attacks he cannot counter, he uncovers a plot spanning generations...whose mastermind might be one of his closest allies! But who is the First Ally?

In ALL-STAR BATMAN VOL. 3, Scott Snyder is joined by Rafael Albuquerque and other superstar artists to pit Batman against his darkest enemies. Collects issues #10-14.

Other Editions - All Star Batman Vol. 3 The First Ally by Scott Snyder 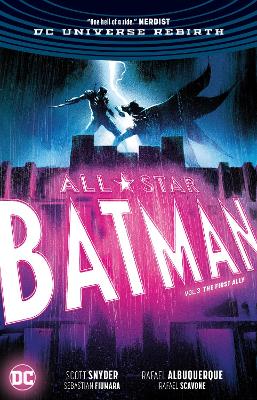 » Have you read this book? We'd like to know what you think about it - write a review about All Star Batman Vol. 3 The First Ally book by Scott Snyder and you'll earn 50c in Boomerang Bucks loyalty dollars (you must be a Boomerang Books Account Holder - it's free to sign up and there are great benefits!)

Scott Snyder is a #1 New York Times best-selling writer and one of the most critically acclaimed scribes in all of comics. His works include ALL-STAR BATMAN, BATMAN, BATMAN- ETERNAL, SUPERMAN- UNCHAINED, AMERICAN VAMPIRE and SWAMP THING. He has also been published in Zoetrope, Tin House, One-Story, Epoch, Small Spiral Notebook,\ and other journals, and has a short-story collection, Voodoo Heart, which was published by Dial Press. He teaches at Columbia University and Sarah Lawrence University and lives in New York with his wife and two sons.