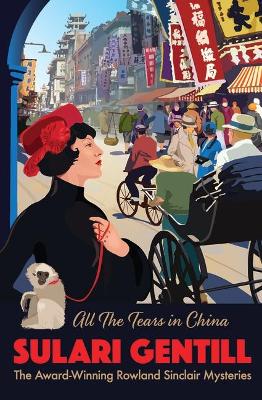 All the Tears in China

Description - All the Tears in China by Sulari Gentill

Shanghai in 1935 is a 20th century Babylon, an expatriate playground where fortunes are made and lost, where East and West collide, and the stakes include life itself. Into this cultural melting pot, Rowland Sinclair arrives from Sydney to represent his brother at international wool negotiations. The black sheep of the family, Rowland is under strict instructions to commit to nothing but a brutal murder makes that impossible. As suspicion falls on him, Rowland enters a desperate bid to find answers in a city ruled by taipans and tycoons, where politics and vice are entwined with commerce, and where the only people he can truly trust are an artist, a poet and a free-spirited sculptress. All the Tears in China throws a classic murder mystery into a glitzy, glamourous, tawdry and dangerous world, entrancing both new and old readers.

Buy All the Tears in China by Sulari Gentill from Australia's Online Independent Bookstore, Boomerang Books.

Other Editions - All the Tears in China by Sulari Gentill 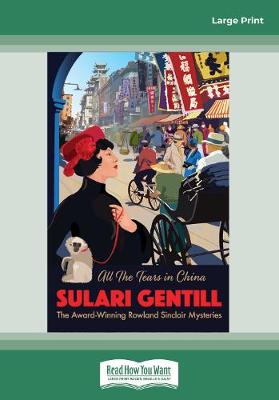 Book Reviews - All the Tears in China by Sulari Gentill

» Have you read this book? We'd like to know what you think about it - write a review about All the Tears in China book by Sulari Gentill and you'll earn 50c in Boomerang Bucks loyalty dollars (you must be a Boomerang Books Account Holder - it's free to sign up and there are great benefits!)

Book Review: All the Tears in China by Sulari Gentill - Reviewed by CloggieA (18 Dec 2018)

All The Tears In China is the ninth book in the Rowland Sinclair series by award-winning Australian author, Sulari Gentill. When wool trader, Wilfred Sinclair sends his younger brother, Rowland to Shanghai on business (with very specific instructions on what NOT to do or say), the added benefit is that he (and his left-leaning friends) will be out of Australia for a while, out of sight of the thugs whose political ire has been demonstrated several times with fists. Unfortunately, this backfires, as Rowland seems to attract trouble in China too.

Shanghai in 1935 has both extremes of luxury and lawlessness. When he is asked to leave the opulent Cathay Hotel due to unfortunate circumstances, Rowland gathers his own little team of useful locals around him and, as events spiral out of control, finds himself needing to investigate a brutal murder to clear his name. As well as murders (more than one), Rowly and his artistic friends encounter arson, attempted kidnapping and coercion.

Gentill’s setting, the international treaty city of Shanghai, allows her to populate her tale with a cast of interesting characters, full of quirks and national traits: refugee White Russians and German Jews, Japanese traders and ex-patriates of many nationalities. Also present: Communists, Bolsheviks and Nazis. An English baronet, a besotted journalist, an Indian taxi driver, a Chinese valet, a wool trader and an English spy all play their part. And of course, Rowland: an appealing, can-do sort of guy, intelligent, a bit impulsive but full of integrity, which is reflected by loyalty of the friends he attracts.

With her superb descriptive prose, Gentill really captures her setting well, enhancing it with quotes from press articles of the era prefacing each chapter. The action and excitement takes off from the first page and does not falter, although poor Rowly does get beaten up rather a lot before the story reaches a heart-stopping climax.

While this is the ninth book in Gentill's Rowland Sinclair series, it can easily be read as a stand-alone, although readers who are unfamiliar with Gentill's work are likely to seek out the back issues once they have had a taste. Gentill's extensive research is apparent on every page, but this is no dry history lesson: the facts drop into the story unobtrusively; there’s also plenty of humour, especially in the banter between the friends. The title is a charming (and meaningful) play on words. All this excellent historical fiction is contained inside a wonderfully colourful cover by Sofya Karmazina. Recommended! This unbiased review is from a copy provided by Pantera Press and Better Reading Magazine.