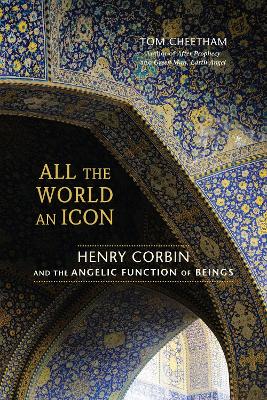 All The World An Icon

Description - All The World An Icon by TOM CHEETHAM

"All the World an Icon is the fourth book in an informal ""quartet"" of works by Tom Cheetham on the spirituality of Henry Corbin, a major twentieth-century scholar of Sufism and colleague of C. G. Jung, whose influence on contemporary religion and the humanities is beginning to become clear. Cheetham's books have helped spark a renewed interest in the work of this important, creative religious thinker. Henry Corbin (1903-1978) was professor of Islamic religion at the Sorbonne in Paris and director of the department of Iranic studies at the Institut Franco-Iranien in Teheran. His wide-ranging work includes the first translations of Heidegger into French, studies in Swedenborg and Boehme, writings on the Grail and angelology, and definitive translations of Persian Islamic and Sufi texts. He introduced such seminal terms as ""the imaginal realm"" and ""theophany"" into Western thought, and his use of the Shi'ite idea of ta'wil or ""spiritual interpretation"" influenced psychologist James Hillman and the literary critic Harold Bloom. His books were read by a broad range of poets including Charles Olson and Robert Duncan, and his impact on American poetry, says Cheetham,

Buy All The World An Icon by TOM CHEETHAM from Australia's Online Independent Bookstore, Boomerang Books.

Book Reviews - All The World An Icon by TOM CHEETHAM

» Have you read this book? We'd like to know what you think about it - write a review about All The World An Icon book by TOM CHEETHAM and you'll earn 50c in Boomerang Bucks loyalty dollars (you must be a Boomerang Books Account Holder - it's free to sign up and there are great benefits!)

Tom Cheetham, PhD, is the author of four books on the implications of Henry Corbin's work for the contemporary world. With a background in philosophy and environmental studies, he turned his attention to the work of James Hillman and Henry Corbin in the mid-nineties, and has been writing and lecturing on Corbin since then. He is a Fellow of the Temenos Academy in London (Temenosacademy.org) and an adjunct professor at the College of the Atlantic in Bar Harbor, Maine.

A Preview for this title is currently not available.
More Books By TOM CHEETHAM
View All