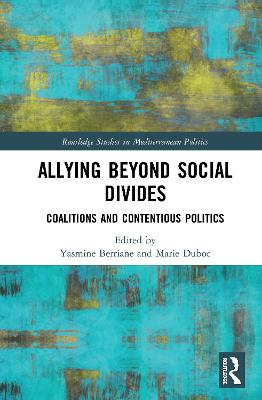 This book offers a fresh look at the role of coalitions in contentious politics in North Africa and the Middle East, based on conceptual reflexions and empirical case studies by researchers who have conducted extensive fieldwork in the region.

Coalitions of actors that have traditionally not been allies have become a key feature of the protest movements that have emerged across North Africa and the Middle East since 2011. But what happens when Islamists ally with Leftists, workers with student unions and young engineers with local tribesmen? How do coalitions form across ideological, generational, professional, ethnic and class divides? Are such collaborations transformative? The authors seek to show that it is important to go beyond analyses that focus mainly on identifying the factors that led to a coalition's success or failure: coalitions are moments of transformative encounter that can lead to changes affecting relations with political authorities, ideological learnings, repertoires of action and understandings of the notion of right. Instead of analyzing coalitions and social divides as two opposite processes, this book further argues that studying the alliance of social groups goes hand in hand with exploring processes of differentiation that are engineered by both political regimes and social actors.

Focusing on the role of coalitions in contentious politics, before and after the Arab uprisings, this book proposes a sociology of coalitions in the Middle East based on key empirical examples, to analyze the transformations that emerged out of such alliances at the levels of repertoires of action, forms of organization, relations to political authorities and ideological learnings.

The chapters in this book were originally published as a special issue of the journal, Mediterranean Politics.

» Have you read this book? We'd like to know what you think about it - write a review about Allying beyond Social Divides: Coalitions and Contentious Politics book by Yasmine Berriane and you'll earn 50c in Boomerang Bucks loyalty dollars (you must be a Boomerang Books Account Holder - it's free to sign up and there are great benefits!)


A Preview for this title is currently not available.
More Books By Yasmine Berriane
View All