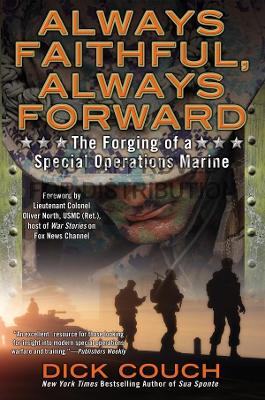 The Forging of a Special Operations Marine

Always Faithful, Always Forward follows the journey of a class of Marine candidates from their recruitment, through assessment and selection, to their qualification as Marines Special Operators. Retired Navy Captain Dick Couch has been given unprecedented access to this new command and to the individual Marines of this exceptional special-operations unit, allowing him to chronicle the history and development of the Marine Special Operations Command and how they find, recruit, and train their special operators. » Have you read this book? We'd like to know what you think about it - write a review about Always Faithful, Always Forward book by Dick Couch and you'll earn 50c in Boomerang Bucks loyalty dollars (you must be a Boomerang Books Account Holder - it's free to sign up and there are great benefits!)

A 1967 graduate of the U.S. Naval Academy, Dick Couch served with the Navy Underwater Demolition and SEAL Teams. He led one of the only successful POW rescue operations of the Vietnam War while a platoon leader with SEAL Team One in 1970. On release from active duty in 1972, he joined the Central Intelligence Agency, where he served as a Maritime Operations Officer. He is the New York Times bestselling author of numerous books and articles on military special operations, including Sua Sponte: The Forging of a Modern American Ranger. He also serves as a consultant and keynote speaker on issues of tactical ethics, moral battlefield conduct, and the future employment of American Special Operations Forces. Dick and his wife, Julia, live in Idaho.

A Preview for this title is currently not available.
More Books By Dick Couch
View All