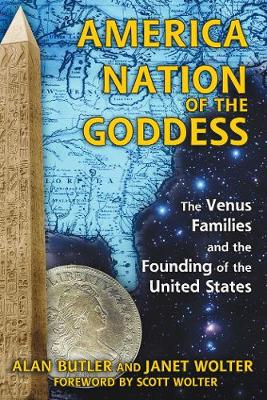 America: Nation of the Goddess

The Venus Families and the Founding of the United States

Description - America: Nation of the Goddess by Alan Butler

* Exposes the esoteric influences behind the National Grange Order of Husbandry

* Examines the sacred design and hidden purpose of the Washington Monument

In America: Nation of the Goddess, Alan Butler and Janet Wolter reveal how a secret cabal of influential "Venus" families with a lineage tracing back to the Eleusinian Mysteries has shaped the history of the United States since its founding. The evidence for such incredible assertions comes from American institutions such as the National Grange Order of Husbandry and from the man-made landscape of the United States where massive structures and whole cities conform to an agenda designed to elevate the feminine within religion and society.

The authors explain how the Venus families, working through the Freemasons and later the Grange, planned the American Revolution and the creation of the United States. It was this group who set the stage for the Founding Fathers to create Washington, D.C., according to the principles of sacred geometry, with an eye toward establishing the New Jerusalem. The authors explore the sacred design of the Washington Monument, revealing its occult purpose and connections to the heavens. They reveal how the obelisks in New York City depict the stars of Orion's Belt just like the Giza pyramids and how the site of one of them, St. Paul's Chapel, is the American counterpart to Rosslyn Chapel in Scotland. Exposing the strong esoteric influences behind the establishment of the Grange in the United States, they connect this apparently conservative order of farmers to the Venus families and trace its lineage back to the Cisterians, who were a major voice in the promotion of the Crusades and the establishment of the Knights Templar.

The authors conclude with the startling revelation that nearly every city in America has a temple to the Goddess hidden in plain sight--their baseball diamonds--exposing the extent to which the Venus families are still at work behind the scenes.


Book Reviews - America: Nation of the Goddess by Alan Butler

» Have you read this book? We'd like to know what you think about it - write a review about America: Nation of the Goddess book by Alan Butler and you'll earn 50c in Boomerang Bucks loyalty dollars (you must be a Boomerang Books Account Holder - it's free to sign up and there are great benefits!)

Alan Butler is a writer, researcher, and recognized expert in ancient cosmology and astronomy with many books to his credit, including Hiram Key Revisited, Civilization One, and City of the Goddess. He has appeared on Ancient Aliens, The Mystery of History, and America Unearthed. He lives in Yorkshire, England. Janet Wolter is a writer and historical investigator. Married to Scott F. Wolter, the host of H2's America Unearthed, she lives outside of Minneapolis, Minnesota.