"This book covers well the issues and problems of the U.S. academic profession in the second half of the twentieth century." -- Contemporary Science

The tale of the American academic profession-that large company of men and women, unprecedented in its size and diversity-needs to be written. A large historical literature on America's colleges and universities exists, but much of it is unashamedly hagiographic. On the other hand, more critical works see American universities as being in dire need of massive reform. This charge is not sustained by the contributors to The American Academic Profession, who hope to shatter the code of silence that passes for discretion, by focusing on the forces that have conspired to create the American academic profession.Graubard includes contributions from important scholars around the world: "How the Academic Profession is Changing" by Arthur Levine; "Small Worlds, Different Worlds: The Uniqueness and Troubles of American Academic Professions" by Burton R. Clark; "The Elusive Academic Profession: Complexity and Change" by Francis Oakley; "Uncertainties in the Changing Academic Profession" by Walter E. Massey; "Stewards of Opportunity: America's Public Community Colleges" by Patrick M. Callan; "Public Universities as Academic Workplaces" by Patricia J. Gumport; "Survival of the Fittest? Postgraduate Education and the Professoriate at the Fin de Sibcle" by R. M. Douglas; "Reflections on the Culture Wars" by Eugene Goodheart; "A Blow Is Like an Instrument" by Charles Bernstein; "The Science Wars and the Future of the American Academic Profession" by Jay A. Labinger; "The Scientist as Academic" by Cheryl B. Leggon; "The 'Place' of Knowledge in the American Academic Profession" by Sheldon Rothblatt; "Border Crossings: Organizational Boundaries and Challenges to the American Professoriate" by Theodore R. Mitchell; "The Development of Information Technology in American Higher Education" by Martin Trow; and "An International Academic Crisis? The American Professoriate in Comparative Perspective" by Philip G. Altbach.The American Academic Profession is not sanguine about what is currently happening in higher education, or what it imagines the future portends. It simply asks the question: Can a society truly understand its universities and colleges when it has moved too quickly from uncritical admiration to uniformed and ungenerous complaint? This volume intends to dispel some long-persistent myths in favor of objective truth. It is a must for anyone interested in academic problems, for those who work in higher education, and for everyone interested in American ideas, traditions, and social and intellectual history.Stephen R. Graubard is editor of the American Academy of Arts and Sciences and its journal, Daedalus, and professor of history emeritus at Brown University.

Other Editions - The American Academic Profession by Stephen R. Graubard 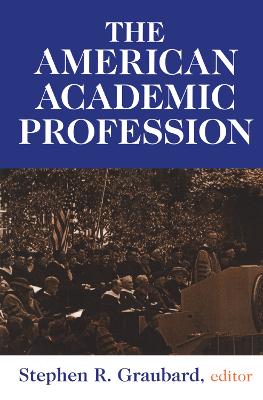 » Have you read this book? We'd like to know what you think about it - write a review about American Academic Profession book by Stephen R. Graubard and you'll earn 50c in Boomerang Bucks loyalty dollars (you must be a Boomerang Books Account Holder - it's free to sign up and there are great benefits!)


A Preview for this title is currently not available.
More Books By Stephen R. Graubard
View All