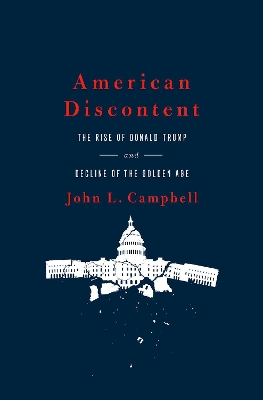 The Rise of Donald Trump and Decline of the Golden Age

The 2016 presidential election was unlike any other in recent memory, and Donald Trump was an entirely different kind of candidate than voters were used to seeing. He was the first true outsider to win the White House in over a century and the wealthiest populist in American history. Democrats and Republicans alike were left scratching their heads-how did this happen?In American Discontent, John L. Campbell contextualises Donald Trump's ascendance to the presidency by focusing on the long-developing economic, racial, ideological, and political shifts that enabled Trump to win the White House. Campbell argues that Trump's rise to power was the culmination of a half-century of deep, slow-moving change in America, beginning with the decline of the Golden Age of prosperity that followed the Second World War. The worsening economics anxieties of many Americans reached a tipping point when the 2008 financial crisis and Barack Obama's election, as the first African American president, finally precipitated the worst political gridlock in generations. Campbell emphasises the deep structural and historical factors that enabled Trump's rise to power. Since the 1970s and particularly since the mid-1990s, conflicts over how to restore American economic prosperity, how to cope with immigration and racial issues, and the failings of neoliberalism have been gradually dividing liberals from conservatives, whites from minorities, and Republicans from Democrats. Because of the general ideological polarisation of politics, voters were increasingly inclined to believe alternative facts and fake news.Grounded in the underlying economic and political changes in America that stretch back decades, American Discontent provides a short, accessible, and nonpartisan explanation to Trump's rise to power.

» Have you read this book? We'd like to know what you think about it - write a review about American Discontent book by John L. Campbell and you'll earn 50c in Boomerang Bucks loyalty dollars (you must be a Boomerang Books Account Holder - it's free to sign up and there are great benefits!)

John L. Campbell is Class of 1925 Professor in the Department of Sociology at Dartmouth College and Professor of Political Economy in the Department of Business and Politics at the Copenhagen Business School. He is the author of numerous books, most recently The Oxford Handbook of Comparative Institutional Analysis (2010), The National Origins of Policy Ideas (Princeton, 2014), The World of States (Bloomsbury, 2015), and The Paradox of Vulnerability (Princeton, 2017).

A Preview for this title is currently not available.
More Books By John L. Campbell
View All