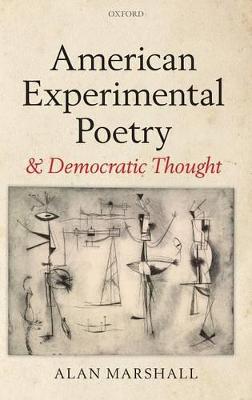 Alan Marshall examines the nature of democratic thought and expression in American experimental poetry, from Walt Whitman in the mid-nineteenth century to George Oppen and Frank O'Hara in the mid-late twentieth. The other main poets considered are Robert Creeley, Emily Dickinson, Mina Loy, Lorine Niedecker, Ezra Pound, Muriel Rukeyser, Wallace Stevens and William Carlos Williams. Through a series of detailed close readings, the book makes some dramatic and
original connections between the experimental tradition and a wide range of thinkers, including Madison, Kant, Marx, Freud, Heidegger, Adorno, Arendt and Cavell, as it seeks to expand and develop the
circumspect humanist critical trajectory of Alexis de Tocqueville's Democracy in America.

» Have you read this book? We'd like to know what you think about it - write a review about American Experimental Poetry and Democratic Thought book by Alan Marshall and you'll earn 50c in Boomerang Bucks loyalty dollars (you must be a Boomerang Books Account Holder - it's free to sign up and there are great benefits!)