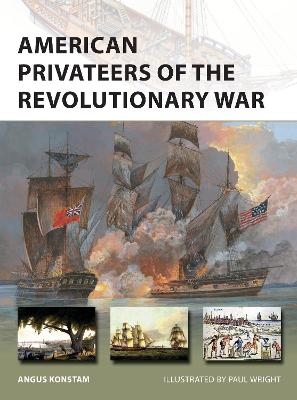 American Privateers of the Revolutionary War

Description - American Privateers of the Revolutionary War by Angus Konstam

During the American War of Independence (1775-83), Congress issued almost 800 letters of marque, as a way of combating Britain's overwhelming naval and mercantile superiority. At first, it was only fishermen and the skippers of small merchant ships who turned to privateering, with mixed results. Eventually though, American shipyards began to turn out specially-converted ships, while later still, the first purpose-built privateers entered the fray.

These American privateers seized more than 600 British merchant ships over the course of the war, capturing thousands of British seamen. Indeed, Jeremiah O'Brien's privateer Unity fought the first sea engagement of the Revolutionary War in the Battle of Machias of 1775, managing to capture a British armed schooner with just 40 men, their guns, axes and pitchforks, and the words 'Surrender to America'. By the end of the war, some of the largest American privateers could venture as far as the British Isles, and were more powerful than most contemporary warships in the fledgling US Navy. A small number of Loyalist privateers also put to sea during the war, and preyed on the shipping of their rebel countrymen.
Packed with fascinating insights into the age of privateers, this book traces the development of these remarkable ships, and explains how they made such a significant contribution to the American Revolutionary War.

» Have you read this book? We'd like to know what you think about it - write a review about American Privateers of the Revolutionary War book by Angus Konstam and you'll earn 50c in Boomerang Bucks loyalty dollars (you must be a Boomerang Books Account Holder - it's free to sign up and there are great benefits!)