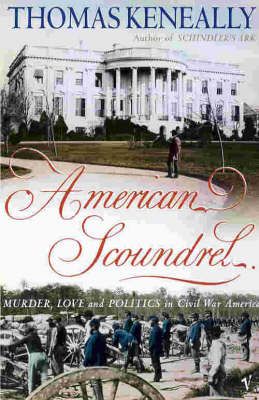 Murder, Love and politics in Civil War America. On the last, cold Sunday of February 1859, Daniel Sickles shot his wife's lover in Washington's Lafayette Square, just across from the White House ... this is the story of that killing and its repercussions.Charming and ambitious, Dan Sickles literally got away with murder. His protector was none other than the President himself, the ageing James Buchanan; his political friends quickly gathered round; and Sickles was acquitted. His trial is described with all Thomas Keneally's powers of dash and drama, against a backdrop of double-dealing, intrigue and 'the slavery question'. Enslaved, in her turn, by the hypocrisy of nineteenth-century society, his wife was shunned and thereafter banned from public life. Sickles, meanwhile, was free to accept favours and patronage. He raised a regiment for the Union, and went on to become a general in the army, rising to the rank of brigadier-general and commanding a flank at the Battle of Gettysburg - at which he lost a leg, which he put into the military museum in Washington where he would take friends to visit it. Thomas Keneally brilliantly recreates an extraordinary period, when women were punished for violating codes of society that did not bind men. And the caddish, good-looking Dan Sickles personifies the extremes of the era- as a womaniser, he introduced his favourite madam to Queen Victoria while his wife stayed at home; as minister to Spain, he began an affair with the queen while courting one of her ladies in waiting; and in his later years, he installed his housekeeper as his mistress while his second wife took up residence nearby. The brio with which Thomas Keneally tells the tale is equal to the pace and bravado of Sickles's life. But, more than this, American Scoundrel is the lens through which the reader can view history at a time when America was being torn apart. This book resonates with uncomfortable truths, as relevant now as they were then.

» Have you read this book? We'd like to know what you think about it - write a review about American Scoundrel book by Tom Keneally and you'll earn 50c in Boomerang Bucks loyalty dollars (you must be a Boomerang Books Account Holder - it's free to sign up and there are great benefits!)