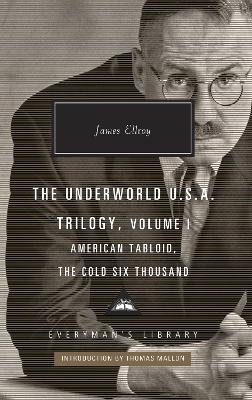 American Tabloid gives us John F. Kennedy's rise and fall from an insider's perspective. We're there for the rigged 1960 election and for the Bay of Pigs fiasco. We're the eyes and ears and souls of three rogue cops who've signed on for the ride and come to see Jack as their betrayer. And we're there in Dallas in 1963 where it all comes to a brutal end.
The Cold Six Thousand the cover-up for the Kennedy assassination begins. This time the ride takes us from Dallas to Vietnam to Las Vegas to Memphis to Cuba to the kitchen of the Ambassador Hotel in L.A. We're rubbing shoulders Klansmen and mafiosi, killers, hoods and provocateurs. WIth Robert F. Kennedy and Martin Luther King. And of course a lot of corrupt policemen.
Blood's a Rover takes us into the 70s. RFK and MLK are dead. A kid private eye clashes with a mob goon and an enforcer for FBI director Edgar Hoover in L.A. There's an armoured-car heist and a cache of missing emeralds. Revolution brews in Haiti and the Dominican Republic. Amidst all this, all three anti-heros fall for Red revolutionary Joan Rosen Klein. Each will pay 'a dear and savage price to live History'.
The American dream as Nightmare.

» Have you read this book? We'd like to know what you think about it - write a review about American Tabloid and The Cold Six Thousand: Underworld U.S.A. Trilogy Vol.1 book by James Ellroy and you'll earn 50c in Boomerang Bucks loyalty dollars (you must be a Boomerang Books Account Holder - it's free to sign up and there are great benefits!)


A Preview for this title is currently not available.
More Books By James Ellroy
View All