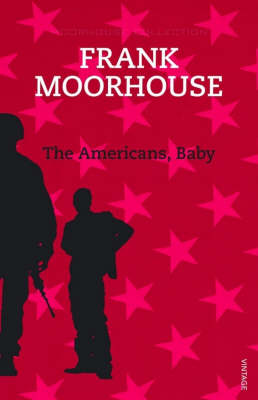 A timeless collection of stories exploring physical and psychological boundaries, some tentatively and others with vigour.

In The Americans, Baby the milieu is a Sydney under-40 population who, hoping that being earnest or outrageous will make them feel real, are left saturated with anxiety instead. An inherent resistance to American cultural intrusions and the risks that those from a great powerful land such as the US take when they meddle in another culture (they can be snared, seduced, destroyed) are explored with traditional Moorhouse flair and wit.

These stories are timeless in their concerns, and explore ideology, idealism, conflict, relationships and sex.

» Have you read this book? We'd like to know what you think about it - write a review about Americans, Baby book by Frank Moorhouse and you'll earn 50c in Boomerang Bucks loyalty dollars (you must be a Boomerang Books Account Holder - it's free to sign up and there are great benefits!)

Frank Moorhouse was born in the coastal town of Nowra, NSW. He worked as an editor of small-town newspapers and as an administrator and in the 1970s became a full-time writer. He has written fiction, non fiction, screenplays and essays and edited many collections of writing. Forty-Seventeen was given a laudatory full-page review by Angela Carter in the New York Times and was named Book of the Year by the Age and 'moral winner' of the Booker Prize by the London magazine Blitz. Grand Days, the first novel in The Edith Trilogy, won the SA Premier's Award for Fiction. Dark Palace won the Miles Franklin Literary Award and was shortlisted for the NSW Premier's Literary Award, the Victorian Premier's Literary Award and the Age Book of the Year Award. Cold Light was shortlisted for the Miles Franklin and Barbara Jefferis Awards. Frank has undertaken numerous fellowships and his work has been translated into several languages. He was made a member of the Order of Australia for services to literature in 1985 and was awarded an honorary doctorate from Griffith University in 1997.