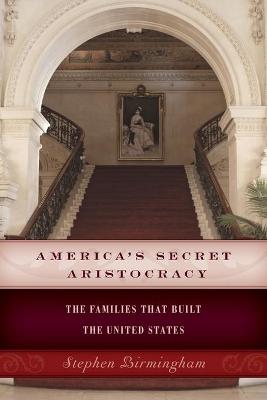 The Families That Built the United States

America has always been a constitutionally classless society, yet an American aristocracy emerged anyway-a private club whose members run in the same circles and observe the same unwritten rules. Renowned social historian Stephen Birmingham reveals the inner workings of this aristocracy and identifies which families in which cities have always mattered and how they've defined America.

America's Secret Aristocracy offers an inside look at the estates, marriages and financial empires of America's most selective club and a gallery of vivid portrait of its members: the William Randolphs, the first of the first families of Virginia; the Carillos and Ortegas, the premier ranchero families of California; Presidents Theodore and Franklin Roosevelt; the Boston Brahmins, including the Lowells, "who speak only to Cabots, and the Cabots, who speak only to God". With countless anecdotes about our nation's elite, including interviews with their modern-day descendants, this is a social history both insightful and entertaining.

Scores of social chroniclers have tried to define America's aristocracy with various Social Registers and Who's Whos. Stephen Birmingham outdoes these lists as his colorful portraits go far beyond simply naming names; they capture the true definition, essence and customs of America's aristocratic families.

» Have you read this book? We'd like to know what you think about it - write a review about America's Secret Aristocracy book by Stephen Birmingham and you'll earn 50c in Boomerang Bucks loyalty dollars (you must be a Boomerang Books Account Holder - it's free to sign up and there are great benefits!)