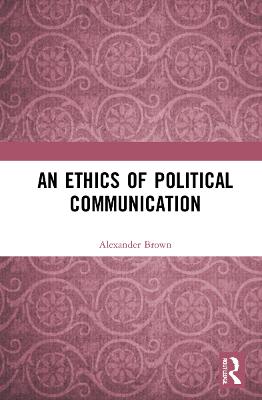 An Ethics of Political Communication

Description - An Ethics of Political Communication by Alexander Brown

Working in the tradition of analytic philosophy, Alexander Brown argues that many different forms of political communication (or anti-communication) that often infuriate the public can also be ethically or morally objectionable. These forms include question dodging, offering scripted answers, stonewalling, not listening, disseminating propaganda, pandering, being insincere, giving false denials, issuing revisionist interpretations, refusing to take responsibility, never apologising, boasting, and gaslighting. Brown invokes a host of normative reasons including those having to do with epistemic arrogance, interference in autonomy, and violating the right to be heard. This is not to say that, all things considered, politicians should never engage in dubious political communication. Sometimes these are necessary evils. Brown argues, however, that further moral inquiry is needed to show why they are evils, and to determine when the use of these rhetorical tactics can be excessive, unreasonable, or out of place.

Book Reviews - An Ethics of Political Communication by Alexander Brown

» Have you read this book? We'd like to know what you think about it - write a review about An Ethics of Political Communication book by Alexander Brown and you'll earn 50c in Boomerang Bucks loyalty dollars (you must be a Boomerang Books Account Holder - it's free to sign up and there are great benefits!)


A Preview for this title is currently not available.
More Books By Alexander Brown
View All

The Genesis of the United States; A Narrative of the Movement in England, 1605-1616, Which Resulted in the Plantation of North America by Englishmen, Disclosing the Contest Between England and Spain for the Possession of the Soil Now Occupied by the Unite
$112.82 $125.35