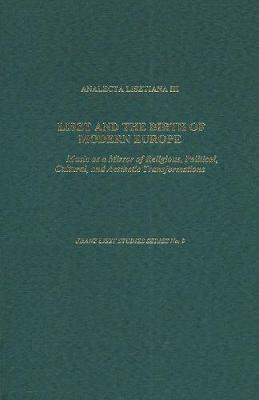 Liszt and the Birth of Modern Europe

Franz Liszt was more than a composer, pianist, and polemicist; he was honored by popes and prelates, befriended by emperors and revolutionaries, and knew poets and artists of almost every variety and temperament.

Liszt and the Birth of Modern Europe deals with such complex and fascinating topics as Liszt's entanglements with Agnes Street-Klindworth and the Vatican Bank, his literary and musical forays into social criticism, and his oratorios, songs, and late piano pieces (including a recently-discovered manuscript of one of his most famous Venetian works). The volume's seventeen essays were first presented at the international Liszt conference held in December 1998 at the Rockefeller Foundation's Villa Serbeloni in Bellagio, Italy, and organized by Rossana Dalmonte and Michael Saffle.

» Have you read this book? We'd like to know what you think about it - write a review about Analecta Lisztiana III book by Michael Saffle and you'll earn 50c in Boomerang Bucks loyalty dollars (you must be a Boomerang Books Account Holder - it's free to sign up and there are great benefits!)


A Preview for this title is currently not available.
More Books By Michael Saffle
View All