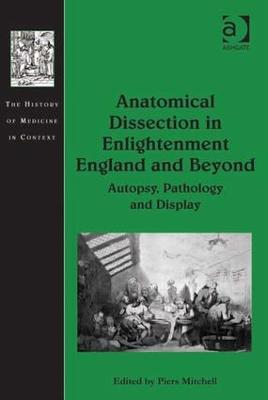 Anatomical Dissection in Enlightenment England and Beyond

Description - Anatomical Dissection in Enlightenment England and Beyond by Piers Mitchell

Excavations of medical school and workhouse cemeteries undertaken in Britain in the last decade have unearthed fascinating new evidence for the way that bodies were dissected or autopsied in the eighteenth and nineteenth centuries. This book brings together the latest discoveries by these biological anthropologists, alongside experts in the early history of pathology museums in British medical schools and the Royal College of Surgeons of England, and medical historians studying the social context of dissection and autopsy in the Georgian and Victorian periods. Together they reveal a previously unknown view of the practice of anatomical dissection and the role of museums in this period, in parallel with the attitudes of the general population to the study of human anatomy in the Enlightenment.

» Have you read this book? We'd like to know what you think about it - write a review about Anatomical Dissection in Enlightenment England and Beyond book by Piers Mitchell and you'll earn 50c in Boomerang Bucks loyalty dollars (you must be a Boomerang Books Account Holder - it's free to sign up and there are great benefits!)

A Preview for this title is currently not available.
More Books By Piers Mitchell
View All

Sanitation, Latrines and Intestinal Parasites in Past Populations
$226.80 $252.00